‘The lost decade’, a tribute to journalism 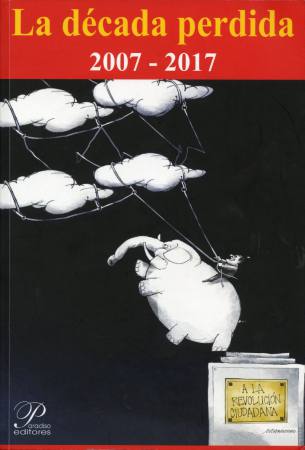 As a tribute to Ecuadorian journalism, to journalists and journalistic companies “that resisted with temperance and courage a decade of persecution and defenselessness”, the writer and editor Xavier Michelena presented a compendium of opinion articles from different editorialists in the country, which chronologically states the ten years of the government of former President Rafael Correa.

The book was entitled The Lost decade 2007-2017 and includes 199 editorials of newspapers and web portals, of 66 authors, classified into three main thematic axes: economy, politics and institutions and international relations. However, it also has columns on human rights, culture, environment, corruption and drug trafficking.

“The reading of this work allows the reader to see that during these ten years, ‘the table was never served’ It gives the reader the sufficient reasons and the civic courage to demand that the bill of ten years of correctness be paid by those who cheated on it, “says Michelena. Gabriela Calderón and Hernán Pérez Loose, writers of EL UNIVERSO, maintain that this compilation puts in retrospective the events of the decade of the strap.

“To some readers it would have seemed at that time that the articles that were published in 2007 were an exaggeration of some of the writers, but in retrospect it can be seen with another vision, those writings can be judged differently, perhaps they were very naive , very critical … “, says Calderón. Perez points out that the articles published in the first three years of the Credito “have a warning tone to the country, where this man was leading us, this presidency of (Rafael) Correa, and yes, much has been accomplished.”

For this reason, he considers that Michelena’s compilation could open a great debate at national level “or it would serve for a reflection of these ten years”. Calderón assures that it is up to the reader of the book to see them (the articles) ten years later “and judge those writings, see who was right, who was wrong”. (I)

Teachers accused of abuse jumped from school to school