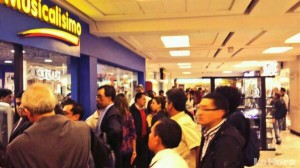 10,000 tickets have been sold to the concert of Paul McCartney in Quito

Red carpet central, the most expensive seats at the Paul McCartney concert  in Quito, are sold-out. The value of the entry was originally $ 550, and according to Ticket Show, organizers of the event, `the tribune seats are on the same way.´

The value of the locations still available is between $ 80 and $ 450, which can be purchased through retail outlets or on-line mode.

10 000 tickets have already been sold for the ex-Beattle concert, to be held on April 28 at the Stadiumde Liga Deportiva Universitaria de Quito, at 21h00.