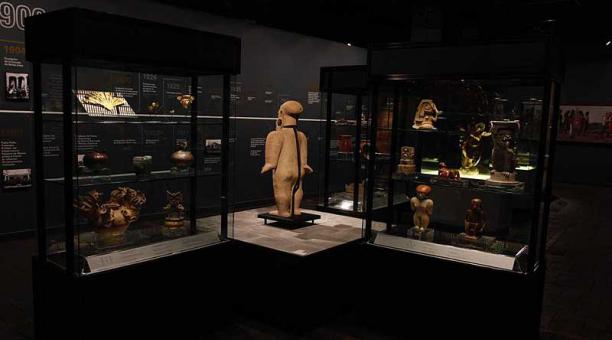 The doors of the National Museum of Ecuador (MUNA) were opened to the public since the morning of this Saturday, May 19, 2018. Some sculptures of Afro-descendant women welcomed the first visitors, who arrived when the stage set up for the event was still being dismantled.

The museum was closed in November 2015, during the World Summit of Habitat III and its operations are resumed after a renovation process that cost approximately USD 1.5 million. The intervention included a reconceptualization of the museographic experience, which integrates technological tools such as touch screens, interactive games, audiovisual projections, as well as interactive spaces for a more enjoyable journey.

But the museum also stopped following a chronological line to rethink on a vision that recognizes diversity, political and social organization, territory, heritage, social memory and knowledge as transversal axes, in a proposal adapted to the architecture of the 5,000 square meters and three levels, which occupies in the building of the mirrors, in the House of Culture.

After a brief registration, the visitor can choose to visit the facilities on their own, with the help of an audio guide or join a group guided by one of the five mediators, available this weekend.

The historian Alejandro López presented himself as the guide of a group made up of 15 people, including children, youth and adults, who followed him to the Historical Nucleus room, where the tour begins, which can last up to six hours.

The news about the reopening of the MUNA motivated Fanny Tamayo to visit a museum in the city for the first time. Her interest focused on knowing the historical process on which the idea of a nationality has been built.

The visitors opted for an abbreviated tour and López briefly reviewed the creation, history and objectives of MUNA. One of the pieces that generated most interest was the Sol de Oro, belonging to the Tolita culture and which has become a symbol linked to the economy and national identity and which is part of the temporary exhibition called Gold, silver and copper.

Danilo Gordillo arrived accompanied by his daughter Alejandra and his niece Renata and took advantage of the fact that he had for the first time before his eyes the original Golden Sun to take photographs.

During the tour he was reinforcing the explanations to his little companions with his own comments. While the visitors continued to be photographed with the most colorful objects in the collection, Michelle Andrade took the post to Lopez in the guide.

However, before reaching the second level, the group had dispersed and was reduced to six people. The undersecretary of social memory Ivett Celi explained that they are adjusting the guidance services according to the flow of visitors and requirements. On the second and third levels, the exhibition on Territory, economy and work from the original societies to the republican era is housed, including pieces of pre-Columbian art, ceremonial objects, paintings and colonial and contemporary sculptures, as well as furniture, utensils and tools, which seen together they talk about the development of the social, political, religious and cultural forms of the society that today constitutes Ecuador.

After three hours of travel Patricio Yumbolema, together with his family and friends, expressed their satisfaction for the tour, which in addition to entertaining and didactic believes that it constitutes an experience capable of strengthening the process of identity construction.