The commander of the Navy, John Merlo, asked that the ship captains inform if the United States has withdrawn their visa. 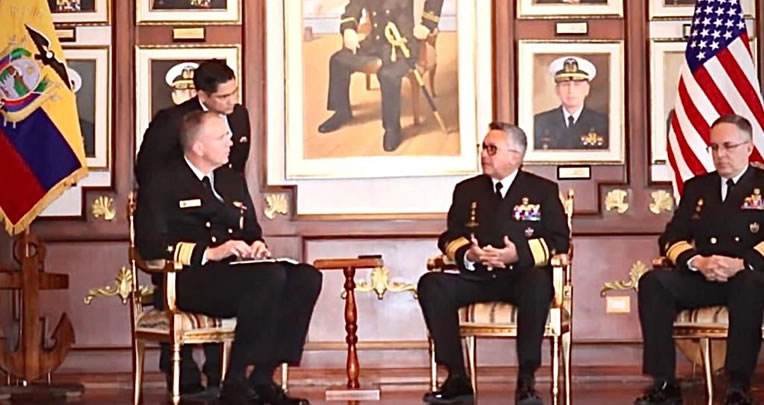 The withdrawal of US visas generated a shake in the Armed Forces, which took action at different levels.

A few days after taking the helm of the Navy, Rear Admiral John Merlo sent a statement to the different headquarters in August 2022 asking them to request the following information from all ship captains.

Officials were to deliver the information by August 30.

Consulted by PRIMICIAS, Commander Merlo reported that they are analyzing the officers’ reports, after which they will send them to the United States consulate, through the Foreign Ministry, to begin the verification.

“As soon as I arrived at the command, I asked the 104 ship captains (among weapons officers, technicians, services and specialists) to report whether or not their visas (to the United States, ndr) have been withdrawn or not.”

And he adds that he has already received “an answer and we are processing that information that I will send to the Ministry of Defense, if there are any news.”

The current Commander took office on August 21, 2022, in the midst of the crisis faced by his predecessor, Brumel Vásquez.

A few days after his appointment, the arrest of eight sailors was made public, who after participating in an anti-narcotics operation in Galapagos, stole four of the 560 kilos of cocaine seized and hid them in a Navy ship.

Another factor that weighed on Vásquez’s departure, according to Carondelet sources, was the suspicion that the United States had withdrawn the visas of high-ranking Navy officers, without sufficient diligence to investigate why.

By then, the United States ambassador, Michael Fitzpatrick, had declared to the press that dozens of civil servants, lawyers, politicians, and officers of the Police and Armed Forces had lost their visas due to signs of corruption.

In this context, while he was in charge of the Navy, Vázquez also initiated an internal investigation: he asked all the admirals of the time to officially report if they had any problem with the withdrawal or suspension of US visas.

“I have that in writing, it was sent to the Ministry of Defense, and we will carry out this procedure through the Foreign Ministry to inform the Embassy that there is no admiral whose visa has been withdrawn. They will know if they respond to us if there are differences with the information they have”, he added.

The objective of this procedure is to contrast the information sent by the high officials (admirals and ship captains) with data from the United States, establish possible contradictions and open internal disciplinary processes, if necessary.

The visa crisis, as well as the participation and capture of soldiers linked to organized crime and corruption cases, also triggered another change in the Armed Forces: the creation of Internal Affairs departments.

Defense Minister Luis Lara confirmed to Primicias that the commanders of the Army, Navy and Aviation have been making progress in the implementation of these departments for several months.

Until now, the Armed Forces only operate the Inspectorates that are in charge, above all, of investigating administrative offenses and imposing sanctions in this field.

The design process of the new units is also supervised by the Joint Command, led by General Nelson Proaño.

This decision is made after a series of irregularities and corruption cases that have come to light since last year, in the context of the vertiginous increase in drug trafficking activities in Ecuador.

One of the cases was the mysterious destruction of the Montecristi anti- narcotics radar, installed by the Air Force in the coastal province of Manabí, to control planes that enter and leave the country with shipments of cocaine.

More than 20 soldiers are being investigated for this case and face internal disciplinary processes, while the Prosecutor’s Office also carries out its investigation, which does not rule out that the radar was destroyed with the complicity of soldiers.

Another scandal is the millionaire illegal collection of money carried out by Corporal Miguel Ángel Nazareno, Don Naza, in the Quevedo class and police club.

Although ‘Don Naza’ had been operating since 2017 and was an active-duty military intelligence officer, none of his superiors warned about his illicit activities. ‘Don Naza’ was assassinated in April 2022.

“In the Navy we began a workshop in September with ship captains and admirals to make a diagnosis, the level of the problem and the most critical areas, in the current environment of the threat of drug trafficking, to develop a plan that allows us, among other things, the creation of the Department of Internal Affairs, “says Commander John Merlo.

A diagnosis will come out of the workshop and then an action plan. “In this way we will directly investigate the personnel and their possible risks of being contaminated,” adds Merlo.

UNESCO required Ecuador to take measures to safeguard the Galapagos