The Navy watches over a Chinese fishing fleet in Galapagos 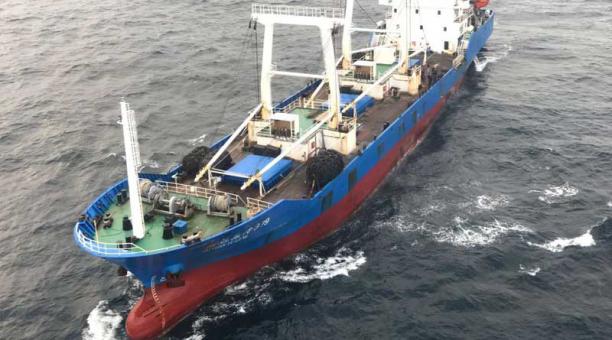 After the capture of the Chinese vessel in the Galapagos Marine Reserve, the focus of the Ecuadorean Navy is on a Chinese fleet navigating outside the Exclusive Economic Zone.

The Chinese ship Fu Yuan Yu Leng 999, with 20 crew members on board, carried about 300 tons of marine species, such as shark fins, hammerhead sharks, and silky sharks. The hammerhead shark is an endangered species and is included in the Red List of the International Union for the Conservation of Nature.

Days before the operation, the Navy watches over a Chinese fishing fleet, 280 miles off the mainland. Naval Operations Commander Darwin Jarrin explained Monday that 300 large and small vessels conform this fleet. “It’s a huge fleet. We must continuously monitor because of the magnitude of the fishing the fleet can obtain; it would be a predation of the aquatic spaces.”

“We think that the fleet is currently carrying out fishing operations outside the exclusive economic zone of both Ecuador and Peru. We are working with the neighboring Armed Forces of Peru and Chile to achieve cooperation for information.” (I)