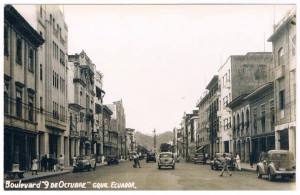 Explore the Guayaquil of yesterday is possible thanks to the Facebook page: the memory of Guayaquil. Where can see photographs of buildings, churches, parks and markets of the city.

Juan Ullauri Castro is the creator, and that social and virtual page is an ideal place to talk about the Guayaquil which are still images of yesteryear, in black and white.
The idea came when his friend, Parcival Castro, an architect and historian, asked him to take a few frames of a documentary filmed in 1949 Watson Kitener, an alien who traveled the world recording everything in its path.
The memory of Guayaquil has a year of created in Facebook and account with 5.257 people speaking about the page and with 10.657 likes.

Buque Guayas is exhibited in New York until Thursday