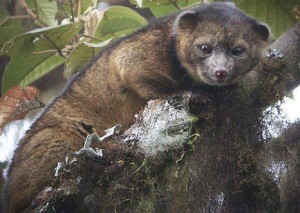 The `olinguito´ (Bassaricyon neblina) is an arboreal carnivorous mammal that lives in Los Andes jungles of Ecuador and Colombia. This animal leads the top 10 discovered species in 2013, according to the International Institute for Species Exploration (IISE).

Its distinction is part of the work of an international researchers  committee led by Quentin D. Wheeler, which selects ten distinguished species among the nearly 18,000 discovered each year.

From the raccoon family, the olinguito can weigh about 2 kilos, has big eyes and a thick ocher fur. It is native of the jungles of Colombia and Ecuador.

The top 10 additionally features a tree (the drago), 12 feet height, from Thailand, the first anemone discovered in the ice and a giant protozoa found in the Spanish coast.

The list is intended to raise awareness about the importance of conserving and knowing the Earth.

Pope Francis starts today his journey to the Holy Land