The opposition has 32 arguments to prosecute Jorge Glas 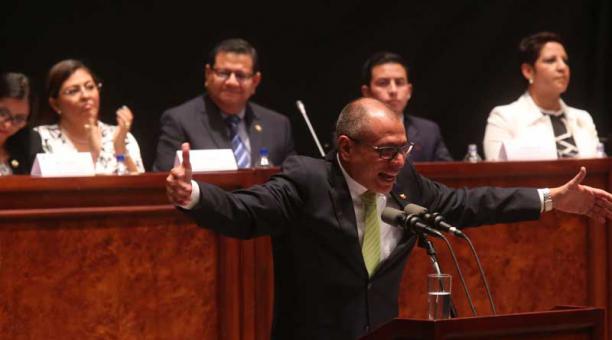 The impeachment request against Vice President Jorge Glas returns to the National Assembly. The Legislative Administration Council (CAL) plans to meet, on the afternoon of Tuesday, December 26, 2017, the favorable opinion given by the Constitutional Court (CC).

In the request for impeachment which 63 opposition members of the assembly signed  32 arguments are established. They are organized around three cases: Odebrecht, Singue and Petroecuador.

According to the assemblyman who requested the impeachment, Roberto Gómez, of the Creo movement, there are signs of embezzlement, bribery, illicit enrichment and concussion. According to numeral two of the Constitution, these crimes are grounds for being able to initiate the impeachment against the Second President.

In the Odebrecht case, the criminal complaints filed by individuals against Glas are detailed. It also includes the authorization given by the National Assembly for him to be submitted to the criminal trial for illicit association. Finally, the case ended with the sentence of six years against the Second President.

The order also includes reports from the Office of the Comptroller General of the State in which indications of criminal liability are determined in six works carried out by the Brazilian construction company in the country. In total, there are 20 arguments related to irregularities in those projects.

The second case, Singue, is the one that has less evidence within the file. There are three. The first is the Comptroller’s report that determines criminal responsibility for the adjudication of this field. There is also the dismissal ordered by the Comptroller and the communication sent by the head of the agency, Pablo Celi, to the president of the National Assembly, José Serrano, in which he informed him about the sanction.

The other nine evidences have to do with the network of corruption that was discovered in Petroecuador the files of the former officials who were judged for acts of corruption. In the latter case, the delegation made by President Rafael Correa to Jorge Glas in the strategic sectors is attached. The presentation of these arguments convinced the Constitutional Court. In the opinion of the case 001-17-DJ it is indicated that the identification of the infractions imputed to the Vice President is met.

This institution clarified that the impeachment does not correspond to a “jurisdictional proper” procedure. Since this possible censorship and dismissal is independent of other criminal responsibilities. After knowing the decision of the CC, the CAL will send the entire file to the Supervisory Commission. This table, chaired by the official María José Carrión, will give five days for the accused and accusers to present evidence of charge and defense.

These can be sent orally or in writing. Then, within five days, a report will be sent to the President of the Assembly. The Plenary will be installed and Glas will be convened there. But according to the terms established in the Law, it will be unlikely that the Legislature will be able to do so. On January 2, 2018, you can declare the abandonment of the position of Glas and choose replacement. (I)