The opposition still shows distrust towards the electoral process 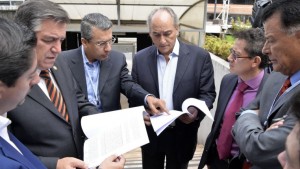 Monday, members of the National Agreement for Transparency, which brings together 14 parties and movements, arrived at the National Electoral Council (CNE) to start the so-called General Plan of Monitoring and Audits.

However, only ten accredited delegates and the media could enter the Matilde Hidalgo Auditorium until noon.

Outside the auditorium Gilmar Gutiérrez (PSP) rejected the regulation, approved last week by the plenary of the Electoral Council.

“It is up to the CNE to dismiss the technician of a political organization when they decide. They even threaten to take legal action against these professionals,” he said.

The legislation also provides that the reports of each phase will be developed by the Audit Team of the National Electoral Council. In these, the “findings” made by the overseers appointed by political organizations will be included.