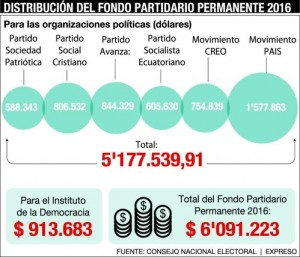 The Electoral Council approved the payment for six organizations.

According to Paragraph 355 of the Code of Democracy, the Fund shall consist of an item of the General State Budget equivalent to 0.3 per thousand of the constant tax expenses. The line item, according to the paragraph, will come from fines collected by the National Electoral Council and supplementally by contributions from the State Budget.
The resources will be awarded only to the political organizations that obtained up to 4% of the valid votes in two national consecutive multi-person elections, or at least three representatives to the National Assembly, or 8% of the mayoralties, or at least one councilor in each one of (at least) 10% of the country’s counties. (I)
Source: http://expreso.ec/actualidad/el-fondo-partidario-permanente-va-de-bajada-HD91225