Change shore. Seeing, feeling, experiencing, even in the flesh, the consequences of actions without the baton of power in hand can push many to change statements, ideas and even criteria that were had on certain people and situations. 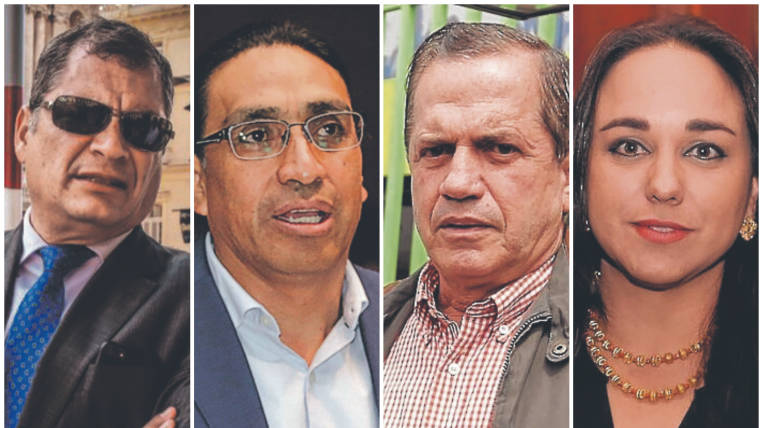 It is what happens with some relevant figures of the Citizen Revolution that now, without being able to savor the honeys of power, in some cases radically change their discourse on certain issues that came to light some earlier and others with the recent strike.

Rebellion. It is the alleged crime for which the prefect of Pichincha, Paola Pabón, is investigated; and former Assemblyman Virgilio Hernández, both with pretrial detention. According to Hernández, it is not about that but about an “approach based on the Constitution”.

The funny thing is that he did not think in the same way (or at least he did not state it) when during the 2015 protests, against the then president Rafael Correa for the amendments to the Constitution, Francisco Sampedro was arrested and prosecuted in Guayaquil for the crime of terrorism They found him a puppet of a sheep and, according to Correa, several explosive devices. He was declared innocent.

Natives. One of the leading groups of this recent mobilization that was opposed during much of the government of former President Correa, and who called several of its leaders with terms such as “golden ponchos” and “corrupt leadership.” Now, the ex-president says he is against any type of violence, including “denigrating the dignity of the people”, and also “despising our poor, our natives.” And it is not the only contradiction that emerges with the unemployment of the former president’s mouth.

Military Obedience In 2016, in the midst of the discussion of the Social Security reforms of the Armed Forces, then President Correa recalled the “obedient and non-deliberative” nature of the security body and also that “military power must be submitted to civil power “ Declarations that are far from the call that, in the context of recent protests, made the public force to “apply conscientious objection.” “They cannot continue repressing their brothers, protecting not the country but a government ended by their own betrayal, mediocrity and surrender and that will have to respond for such repression,” Correa said in a video released on October 11 on social networks .

Political persecution The argument most used by the correísta dome to justify the judicial proceedings against him. Former Foreign Minister Ricardo Patiño is one of them. Investigated by instigation, the politician says he is being persecuted for a speech he gave in the framework of a political encounter with militants in Latacunga. “Ideas cannot be pursued,” he said in an interview. However, when he was the principal rector of Ecuadorian diplomacy, he agreed with the court ruling that sentenced three executives of the newspaper El Universo and a journalist to prison and to pay a millionaire fine for an opinion column. “Mr. Pérez is not a persecuted politician,” said the then foreign minister when referring to Carlos Pérez, director of the newspaper, who requested asylum at the Embassy of Panama. Now Patiño is isolated in Mexico.

Democracy. The defense of democracy from parliaments was a constant of correismo, not only in Ecuador but in several countries of the region. Gabriela Rivadeneira, then president of the Assembly, did so in the framework of a meeting of parliamentarians in 2016. Now, on October 3, 2019, she was the first to place on the table the removal of President Moreno by parliamentary means.

Before: “Golden Ponchos … corrupt leadership”, referring to indigenous leaders. “Unable and liar”, in allusion to Marlon Santi, former president of the Conaie.

Then: “We will never be with anything that denigrates the dignity of the person, nor accept that our poor, our indigenous people be despised.”

Before: “It is democratic to express their disagreement, what is inappropriate and illegitimate is that they try to provoke violence to see if this creates chaos.”

Before: “Pérez is not a persecuted politician”, in reference to the asylum granted to the editor of the newspaper El Universo, Carlos Pérez, sentenced by an opinion column.

Then: “They do not persecute me for corruption, but for a speech in a militant assembly … Ideas cannot be persecuted.”

Before: “I want to make a call to democracy from parliaments, because we are not here to betray the popular will, but to strengthen it.”

Then: “This National Assembly has to determine the breach of duties and move forward to the removal of President (Lenín) Moreno.”