As part of the amendment to the Comprehensive Organic Criminal Code (COIP), substances subject to non-psychoactive cannabis or hemp control were excluded, that is, the cannabis plant and any part of said plant, whose content of delta-9-tetrahydrocannabinol (THC) is less than 1% in dry weight, whose regulation is the responsibility of the National Agrarian Authority.

Omar Vacas Cruz is a scientific researcher at the QCA Herbarium of the Pontifical Catholic University of Ecuador (PUCE). He has been studying medicinal plants for 20 years, including cannabis. 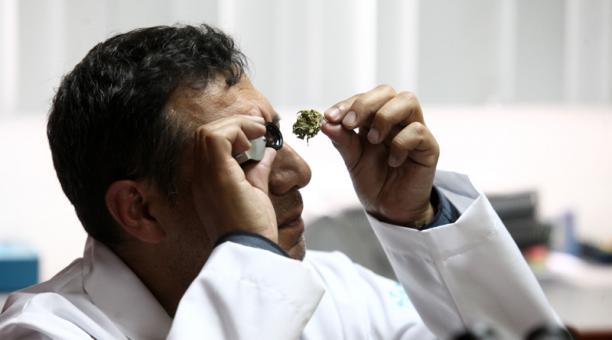 For at least 10 years, he says, there are Canadian companies interested in sowing hemp in Ecuador.

Industrial hemp or hemp is the name of the cannabis plant varieties and the name of the fiber obtained from them, which has, for example, textile uses. “This occurs in rough, dry, sandy soils, where it serves well even for eroded lands to become useful because it fixes nitrogen.

The even solar position of the country of daylight hours, the organic matter, being a country with volcanic lands -anota- makes this hemp plant grow without problems and that its product is used in textile and now in medicine ”.

The PUCE, he says, is interested in processing the permit for research, planting, harvesting and preparation of medication with cannabinoids. The account that they are about to acquire a critical CO2 extraction equipment, to ride on the campus in Nayón and guarantee a quality product, with sanitary registration, control of heavy metals such as mercury, for example.

“Our university does have a baseline, which we were going to deliver to the former Health Minister, Verónica Espinosa. We have that information that is confidential. It is a baseline of the cannabis species in Ecuador and the clinical uses that have been given to it. Some that do not work and others very effective ”.

This researcher is concerned that in Ecuador, a good part of those who produce cannabis oil are consumers, who began to see an economic possibility in this. Recommends that the health authority, the Arcsa, is responsible for controls.

“We don’t know, he stresses, to get the extracts going, what concentrations they use, it seems to me that they work a little to the eye.”

The regulations should cover topics such as how much these artisans can grow, allow them to do so per hectare or a certain number of plants per person will be authorized.

And at that point we have to differentiate several aspects; someone can, he says, have 10 plants, but the plant has three stages: germination, vegetative state and flowering; There are several intermediate stages, he clarifies.

In Uruguay, says Cows, for example, a certain number of flowering plants are accepted, even if they have more in a vegetative state. These details must be known by the competent authority, to give permits.

Many producers make oils and these medicinal products in pots. And that should be done in a technical way, through a laboratory and that implies costs.

He also says he has learned from people who use marijuana to produce oils, to which they also mix expired pills, vasodilators, which he thinks could lead to serious health problems.

“An overdose of marijuana is not common, but mixtures can be dangerous.”

“There are people who use pain to make money; That’s why I think that importing in the first instance seems fine to me, but that will create a black market, since importing will mean having products at higher prices.

Here normally a good oil, made by Ecuadorians, costs an average of USD 30, for a 20 ml bottle. I wonder how much sativex (solution for oral spraying, with cannabis extracts) will cost in pharmacies. ”