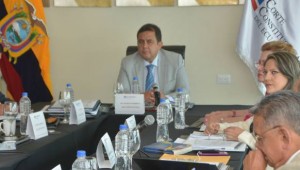 The President of the Constitutional Court (CC), Patricio Pazmiño, defended the decision issued by the CC and gave the National Assembly the power to amend the Constitution, in16 of the 17 points raised by Alianza PAIS (AP).

“Some politicians in campaign, trying to discredit the ruling, saying that we deny the referendum, but this is social fraud … we do not rule on the query, that is a social lie that leads to confusion, undermines the institutionalization and threatens with chasing those who issue rulings,” he said.

He explained what he calls it a social fraud. “Social Fraud: repeat something that does not exist to make it true, it misleads the public opinion,” he said.

Pazmiño said that the decision was consistent with the law, whereas in its analysis a study of conventionality was done, which would correspond to the legal and constitutional innovations.

Furthermore, Pazmiño said that in this case any resource -extension or clarification- that could be appealed will not change the substance of the judgment.