The Prosecution investigates how 366 university degrees were registered 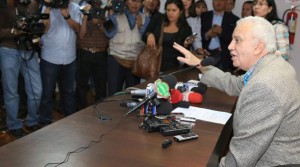 Government officials are part of the list of people who paid `hackers´ to register a fake college degree in the computer system of the Ministry of Higher Education (Senescyt). This was confirmed by Rene Ramirez, head of that body, while handing information of 366 cases to conduct the appropriate investigations to the Attorney General.

After receiving the information, Galo Chiriboga, Attorney General, sent the list of those involved to the National Secretariat of Public Administration (SNAP) to verify if there are people who hold public office are included in the list of degrees with inconsistencies.

In the event that the presence of public employees is confirmed in that record, Chiriboga said they will “immediately proceed to dismiss those officials from their office.” (I)

Rafael Correa says that election campaign ‘will be very dirty’