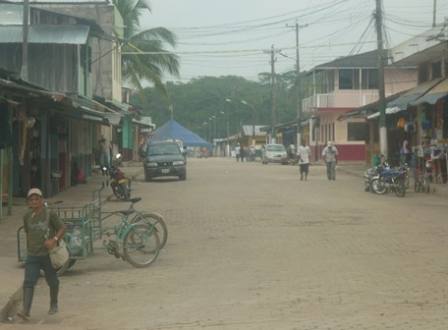 The roll-up door of a pharmacy in Puerto El Carmen de Putumayo, in Sucumbios, was destroyed by the explosion of a bomb. The complaint was filed by the owner who attributed the fact to retaliation.

According to the complainant, a few days before an Ecuadorian woman went to his pharmacy to summon him to a meeting to set the prices of vaccines. At least 20 local owners would have been visited by the same woman.

The meeting never took place because the affected person did not pay attention to the threats. When his business was attacked, he went to the Prosecutor´s office and initiated the investigations, and with the help of military intelligence, he was able to locate the address of the woman and a Colombian citizen. Both were arrested on August 4 after a raid.

The prosecution is investigating whether the pair belongs to the Revolutionary Alfarist Movement (MRA for its Spanish acronym). Evidence that was presented at the indictment hearing (see chart) was found in their possession. The defendants were held in police custody.

The crime for which they are being investigated is typified in the Criminal Integral Organic Code (COIP). The offense punishes with three to five years in prison those who manufacture, acquire, supply, commercialize or transport without authorization, firearms, its parts or ammunition, explosives, etc.

Noboa: “I need a 5 thousand times richer country than the current one”