The Queen of Quito Will Be Chosen Tonight 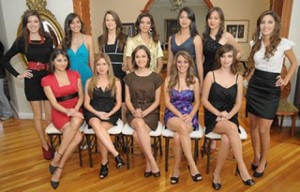 Twelve young Quito girls are the candidates are vying for the Queen of Quito crown tonight at Teatro Sucre (Sucre Theater).

Marieta Almeida, Diana González, Ana Hidalgo, Claudia Lasso, Manuela Merchán, Maria Moscoso, Nahir Saud, Thalya Pérez, María Rodríguez, Jhajaira Urrea, Ana Vela and Ana Vaca—most of them are university students aged between 18 and 24 years old— were chosen among 215 applicants to participate in this important event to be held on the eve of the capital’s celebrations.
The 12 candidates began their volunteer work—Queen of Quito Foundation is well known for providing help to the ones that need it the most— since they were formally presented to the media and the public (October 28th).

The participation in the Guagua Linda 2010 contest was among the activities of the candidates’ busy schedule. The most original guaguas (bread in the shape of a baby) were chosen as the winners.

Nina Pereira, president of the San José Municipal Foundation, is the organizer of the event and the candidates pledged to work on a new social challenge to benefit the neediest in the city.

Juan Sebastian Lopez, also known as Juancho, was the choreographer who prepared to girls to be on the spotlight tonight. It has taken a month for the show to be prepared “it has been a process. This year has highlighted the concept of the elderly and that’s what we want to share on the stage. Pictures of elderly will be projected on the screen,” said producer Roberto Aguirre general.

Teleamazonas will start broadcasting the event at 20:00 (local time). Sergio Sacoto and Fausto Miño will sing at the pageant, and also the official song of the program will e revealed.