The rate at which the country grows is insufficient 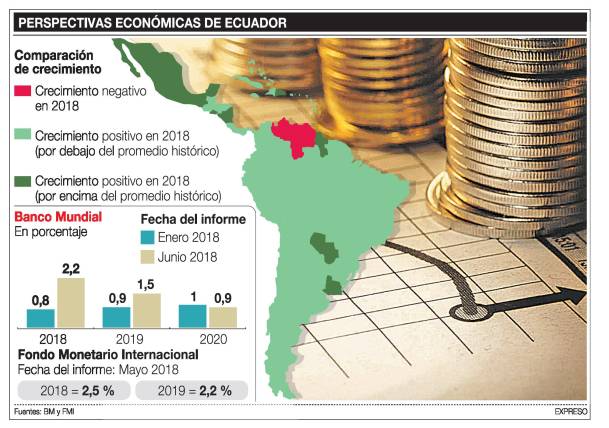 One of Ecuador’s goals is to create more jobs, but that goal will be very difficult to achieve. The new economic perspectives of the World Bank (WB) improves the growth figure (goes from 0.8% to 2.2%), but it is not enough for the country to fully overcome the problem of lack of work.

“The Ecuadorian economy must at least grow by 4% to ensure the creation of employment sources, increase the levels of wealth per capita and improve the living conditions of the population,” Profitas economist Felipe Hurtado tells Diario EXPRESO .

A vision shared by the president of the College of Economists of Guayas, Larry Yumibanda. Explains that last year the growth was 3% and despite this the unemployment rate was 4.6%, in December and employment in the informal sector was 44.1%, according to the National Institute of Statistics and Census (INEC). So, what should be expected with an economic growth of 2.2%.

What most worries analysts is that for 2019 and 2020 a slowdown in the economy is expected. In this regard, the president of the Chamber of Commerce of Guayaquil, Pablo Arosemena, indicates that the sustained growth in the long term requires avoiding patch measures and aiming at transversal ones.

As of March of this year, 362,051 people are unemployed, in the underemployment there are 1’498,139 people. Despite the Government’s efforts, it is still difficult for young people to find a job.

The report of the WB allows to see that when the economy of the country decreases the figures of unemployment, informal employment and underemployment can be maintained or generate a juncture nothing positive for the common pocket that would rebound in the companies. And it is that the people without money do not buy and without sales there is no greater production, therefore the effort of the companies not to dismiss their collaborators will be maintained.

According to the WB, the Ecuadorian economy will moderate its growth in the medium term (2019 to 1.5% and 2020 to 0.9%). “Therefore, it is essential that the new economic team move forward in a process of fiscal consolidation while betting on improving the business environment in Ecuador, which allows moving from a model dependent on spending and public investment to another supported by private investment and the promotion of exports, “suggests Hurtado.

The positive, but partially, is that this year’s economic outlook improved. The downside is that it is based, in part, on the increase in the price of a barrel of oil. “What still puts the economy of the country at the mercy of the price of raw materials,” says economist Jorge Calderón, rector of the Argos Technological Institute. He adds that the WB figures are quite optimistic, because Ecuador is still working to solve problems such as financing. On the other hand, there is consumption, which is not yet dynamic as required. The inflation of April this year was -0.14% and in May of -0.18%.

Nonetheless, the international organizations adjusted their perspectives based on transparency in the Government’s accounts, political attitude and awaiting the results of the economic project.

The president of the Federation of Chambers of Commerce, Patricio Alarcón, says the WB is still unclear what the economic law will generate, how much investment can be brought, how much exports can grow. “Then, there is a lot of fabric to be cut. However, the economy must go through a process of adjustment, after moving from a model of current spending and debt that drove the growth of consumption. Only corruption made an expenditure of 24 million dollars. And now the government must lower spending and work to make the private sector the engine of the economy. ” It highlights that the previous Government raised public spending from approximately 20% to 40% of the Gross Domestic Product.

It should also be taken into account that the 3% growth in 2017 was due to indebtedness. And based on this, it must be clear that the country will have to continue to borrow. The same has to pay an annual service and debts.

The meaning of the WB figures is that the country’s economy slows down, complicating employment in the country.

Growth in the region increases to 1.7% in 2018 (one level lower than previously projected) and 2.3% in 2019, driven by private investment and consumption. The downward revision of the forecasts is due to the fact that the contraction registered in Venezuela is much greater than that which had been projected in January, and also reflects the lower growth of Argentina. (I)