The relationship with Mexico is key in security and migration. The signing of a trade agreement with that country would facilitate Ecuador’s entry into the Pacific Alliance. 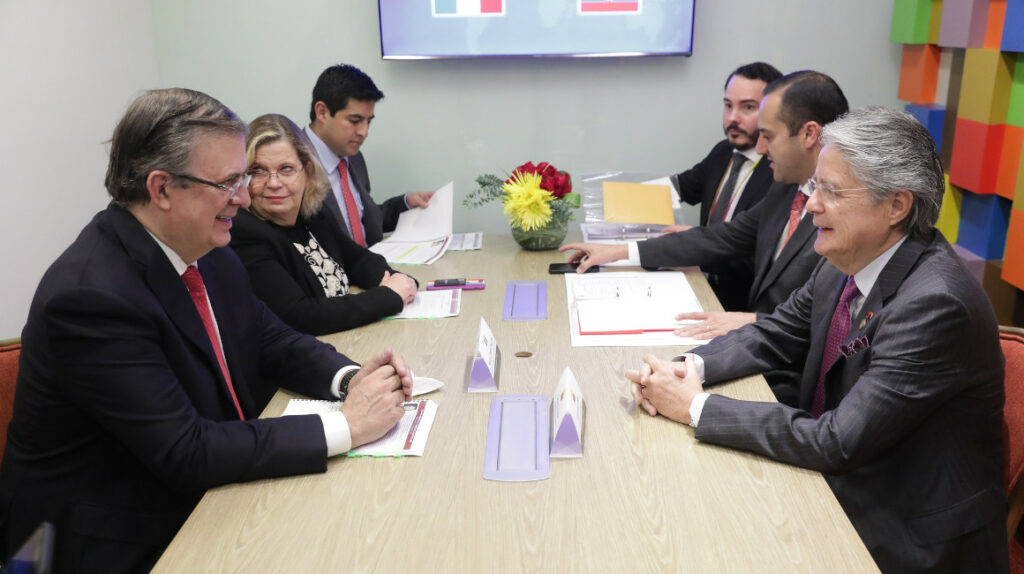 Meeting between President Guillermo Lasso and Mexican Foreign Minister Marcelo Ebrard to review the progress of the trade agreement negotiations, on August 7, 2022, in Colombia.

President Guillermo Lasso is waiting for the government of his counterpart Andrés Manuel López Obrador to sign the trade agreement, which has been on the negotiating table for almost four years.

This agreement is the key that Ecuador needs in order to become a full member of the Pacific Alliance .

According to Foreign Minister Juan Carlos Holguín, there is a unanimous decision by the countries of the trade bloc to invite Ecuador to the December Summit. “However, if we do not have our agreement with Mexico before November, we will not attend ,” said the head of Ecuadorian diplomacy.

Although the “irritating” points of the document are three of Ecuador’s star products (shrimp, bananas and tuna), Foreign Minister Holguín assured that it would only be pending to find an intermediate point on shrimp.

This is because President López Obrador previously said that there were still no agreements on the three products , despite the fact that the ninth round of negotiations has been going on for more than four months.

A strong diplomatic link between Quito and the Federal District has its origins in the problem related to irregular migration . Most Ecuadorians seeking to reach the United States do so by crossing the Mexican border.

The records of Ecuadorians detained on the crossing, injured in transit due to the poor conditions provided by the ‘coyoteros’ or dead on the road are constant.

The Vice Ministry of Human Mobility records that, between January and August, 12,921 Ecuadorians have been deported from the Mexican border and of these , about 3,000 are minors.

The social and economic consequences of the pandemic aggravated the migration crisis of Ecuadorians and made migrants now also try to take their children to the United States . Most minors travel without family company .

This forced Ecuador to reinforce its diplomatic headquarters in Mexico and send a career ambassador with extensive experience such as Francisco Carrión.

The other edge that continues to gain importance in the bilateral relationship is that of security . Especially since narcoterrorism has grown in Ecuador .

The government of President Lasso has intensified the search for international support in this matter and the main allies are the United States. But Mexico and Colombia, as the headquarters of the largest cartels in the region, represent key players.

At the end of 2021, there was a cooperation meeting between the armed forces of both countries; to deal with safety issues; aircraft themes; surveillance and control systems, especially airspace; military education and training; explosive devices; cyber security and cyber defense.