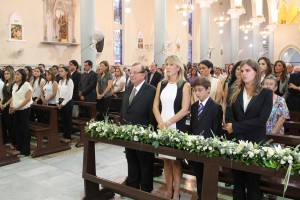 On Monday April 28th, at 18:00 pm, was held the Requiem Mass of the Ecuadorian entrepreneur Luis Noboa Naranjo, at the Shrine Mary Help of Christians, located on the Domingo Comin street. Yesterday marked the 20th anniversary of the death of who was considered the greatest businessman of the twentieth century in the country.

At the ceremony were present the Attorney Alvaro Noboa Ponton, his family, friends and employees of his companies, who heard the sermon of the priest, which was touching and highlighted the work and sacrifice made by Luis Noboa Naranjo in order to become a man of success and to give decent work to thousands of Ecuadorians.