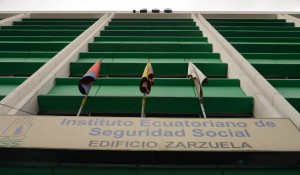 The president of the Board of the Ecuadorian Institute of Social Security (IESS), Richard Espinosa, confirmed yesterday that the change of distribution of the contributions that members provide to the pension and health fund was adopted at the session last Friday.

The change, based on the study of the actuarial Volrisk company begins to take effect from this November and involves the reverse of the current distribution of the contribution, which in total is 20.50% of the salary. Until October, 9.74 points of that contribution went to Pensions and Health received 5.71 points.

The approved change is that pensions receive 6.06 points and health 9.94 points. The labour risks premiums is also reduced from 0.55 points to 0.20.

For Espinosa, changing the structure of contributions is not illegal, as it had been done on other occasions since 2011. He also reported that in relation to a clause of Section 54, which prohibited the transfer of resources from one fund to another It was repealed through a transitional provision of the integral Organic Criminal Code, approved in January 2014.

The former terrorist group Alfaro Vive Carajo, will seek a space in the elections of 2017