The risk of administering justice in Esmeraldas: 4 testimonies 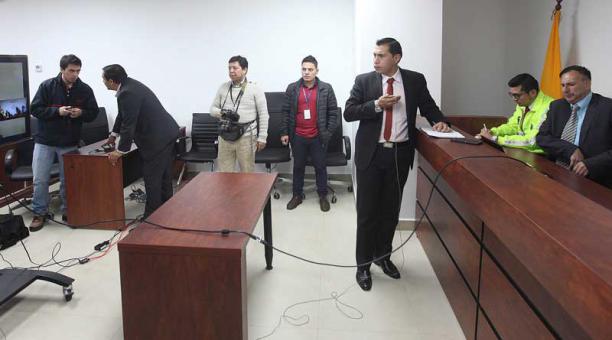 They are afraid. They do not give details and ask not to be identified. Four judges from the northern border tell how they have been frightened since a car bomb exploded in the San Lorenzo police station on January 27, 2018. One of them was harassed.

The guard discovered that two people were photographing the house. But before it had been intercepted by two vehicles, while moving between San Lorenzo and Santo Domingo de los Tsáchilas.

The drivers of those cars forced him to leave the road and when it was closed they did not say anything and fled. The judge believes that it is a psychological war, because of the four trials that he has in his power and that are related to the dissidents of the FARC.

On Monday afternoon and evening, the magistrate contacted Freddy Sarzosa, active police officer, security expert; and with Ricardo Camacho, security consultant for the Judiciary. They were on the ninth floor of the North Judicial Complex, in Quito, and were going to provide security recommendations to the border judges.

For two hours, he and three other judges working in Esmeraldas explained how the area is, the influence of the mafias, the lack of attention from the State and how they have been frightened. It is the first time they make an exhibition of this kind.

A magistrate spoke for 30 minutes and wondered why the police have not had results against crime, even though they have been “so long” on the border. “Rather (it was said) that crimes fell in those sectors.” He also questioned that the State has not had a “real presence” police or military in Mataje.

“There has not been real control that gives results.” And of San Lorenzo, he assured that some people do not live from legal activities but from drug trafficking. Then another judge appeared. He is also scared. In March, unknown persons called his wife and threatened to kill the judge.

Then he saw unknown people photographing his daughter. He believes that all the pressure is on the seven trials that he has in his office and in which the FARC dissidents are being tried. Now he  is protected by police of elite corps, such as the GOE. The Ministry of the Interior says that specialized agents of that group, the GIR and the GEMA anti-drug service are deployed in Esmeraldas to reinforce protection.

In addition, each officer has a fixed agent. Despite this protection, the judge warns that the risk of a possible aggression is latent. Another judge believes the same and that the family can also be targeted.

He met a case related to the leader of the dissidents and says that this was “terrible” and that he was distressed for three weeks “without being able to do the job with peace of mind”. “When I knew that I was going to know this case, psychologically I ended up, I destroyed myself. I did not know how to continue a hearing (which I had at that time).

There I was clear about how serious it was to have a preventive detention process against eight people from this group (Frente Óliver Sinisterra). ” Before, he had been part of the Unit for the Protection of Victims and Witnesses for two years and said that the protection of the family environment “falls short”. “The State owes the province of Esmeraldas 50 years of delay.”

Another border judge also points to the State and indicates that he has not received psychological help. “You live with a psychosis that at any moment something can happen to us.” After listening to everyone, Captain Sarzosa suggested, for example, not to divulge personal or family information in social networks, to disseminate the measures with the family.

“The moment is different; now they are subject to threats to their families or property, kidnappings, extortion. The level of violence has increased or new crimes have been generated.”

For these things, the Judiciary also intervened the Multicompetent Unit of San Lorenzo. They placed metal detectors in the main door, video surveillance cameras on all floors and smoke detectors. That intervention cost about USD 20,000.

After the attacks in Esmeraldas, the judges of the northern border reported being victims of threats. The Interior Ministry says that seven magistrates of that province have security devices to avoid risks. (I)