The Second round of negotiations with the EU was concluded 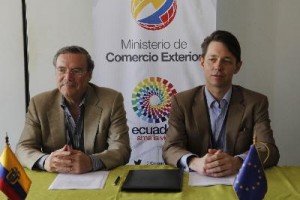 Yesterday concluded the Second Round of negotiations for a trade agreement between Ecuador and the European Union (EU).

After signing the Report Conclusions with Mattias Jorgensen, from the EU, And the chief negotiator of Ecuador, Roberto Betancourt , stated that progress was made in several tables. “The access of industrial goods and services are issues in which advances were made”

However, not in all points could be rapidly progressed. For example, the tables of intellectual property and public procurement issues remain pending.

According to the document signed by both parties, there is information on the origin and market access of agriculture that should be subjected to consultation, whose respective results will be discussed in the next meeting which will be in Brussels, but a date has not still been set.