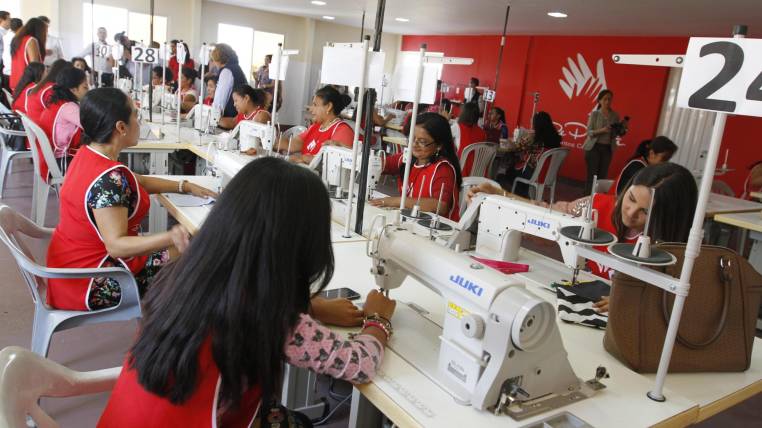 Two projects paint a promising horizon for the sector of micro, small and medium entrepreneurs. The goals are national and there are opportunities for the manabitas, who still have tears from the earthquake two years ago. On the one hand are the goals of a guild and on the other, solidarity action of an icon store of Guayaquil, in partnership with a foundation.

The strategy of the textile and clothing sector, designed in 2017, aims to triple exports in five years, that is, until 2022. The goal is to reach 350 million dollars of sales abroad, giving priority to products made with value added, according to the Association of Textile Industrialists of Ecuador (AITE). This without quantifying the sales of the national products that are given in the country.

Part of this income can reach the hands of the garment microentrepreneurs, to the extent that their products have high quality. Under this corner, the independent work that De Prati has been doing together with the Acción Solidaria Foundation since 2014, with a social vision, offers the Women Entrepreneurial Confederation program. So far, 257 women have been part of this initiative, generating different microenterprises or entering to work with suppliers of the De Prati stores, both in Quito and Guayaquil, Soledad Ponce, De Prati’s senior marketing manager, told Diario EXPRESO.

Now the international quality confectionery course was opened in another city in the country. A year ago the store opened a store in Manta, in the province of Manabí. So to give back the good reception that the store had, it offers the course to the women of manabi. In a first stage they will participate 30. Among them is Nelly Vélez, 53 years old, who after two years still has her house as it was left by the earthquake, collapsed. She lost her job in 2016, because the earthquake damaged the machines with which she made clothes for the workers of the fishing boats. Her former boss did not have the money to buy the tools again and preferred to close the business. Since then Nelly does small jobs to earn a few cents. Without a home, she had to return to live with her parents. Therefore, the training course opens the opportunity for stitch by stitch to rise from the earthquake and the economic crisis.

But she is not the only one with a unique story. There is also Karina Vera, 26, who on the day of the earthquake was pregnant and sleeping in the open gave her Zika, “by a miracle,” she said, “the baby was not affected.” Now she seeks to level her economy.

At the opening of the course, another of the participants, Zoila Guevara, said that you cannot turn back the hands of the clock (referring to the earthquake), but it can be wound up. In the sense of moving forward and have chosen to enter the fashion industry, whose gear is driven mostly by the microenterprise. For example, in De Prati, 90% of the clothes sold are made in the country.

It is estimated that the textile sector is the second that generates more employment, some 174,125 places, which represent 21% of what the manufacturing industry produces. These female warriors joined these ranks. (I)