Renato Avilés is a 34-year-old guayaquileño dancer who has lived in Santiago de Chile since 2001. In that year, he traveled to the country of the lone star to participate as a jury in a dance championship. After finishing the tournament, he decided to settle there definitely. 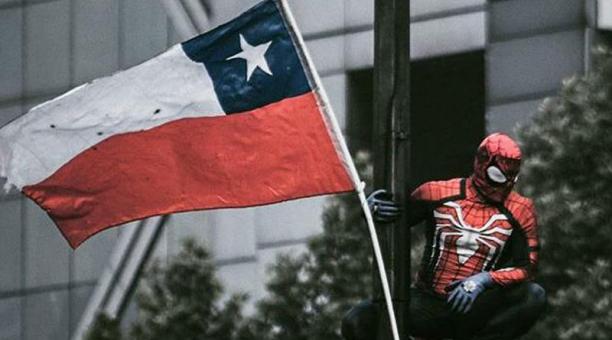 “I found a country that, compared to Guayaquil before, was very quiet. In my land there was a lot of crime with the gangs, the so-called nations … Arriving at a place and finding that peace with little crime, without so many deaths from robberies, made me stay, ”he recalled in a telephone interview with this newspaper.

He says he was already a noted artist when he arrived in Santiago. Therefore, he quickly got a job as a teacher in an institute where he worked for more than 10 years. Then he dedicated himself to producing small events and other activities.

“At one point I stopped teaching because I was in a circle that could not leave, I felt bored. I was unemployed by my own will until I found myself and took a course. Just then I learned that I was going to be a dad and I needed to work urgently. ”

Before, he had already analyzed working as an artist in the streets. He wanted to present himself as a picturesque, colloquial character and decided to disguise himself to give life to his character, the Stupid and Sensual Spiderman. “At first, people told me ridiculous, find yourself a normal job.

They didn’t like it, but I believed in what I was doing. ” Three months later he started doing better and in the sixth month he became a well-known character in the streets and avenues of the Chilean capital.

His fame rose like the foam a year and a half ago when a video recorded in the Santiago Metro was viralized, in which he appears dancing before the eyes of the passengers, who laugh when they observe their sensual and jocular movements. “Many celebrities uploaded it to their social networks like Daddy Yankee, Marcelo Tinelli, Olga Tañón, Omar Chaparro.

They called me from Europe to work, but I only accepted an invitation to Mexico last year and immediately returned to Chile. ” He says that his son Javier, four years old, sees him almost every day and cannot leave him alone for a long time because he becomes very sad.

That is why he has not yet made the leap to the Old Continent. At present, Aviles and his character are very dear in the southern country, but it is strange that in Ecuador he is not known. More when on August 15 of this year, he helped detain a man who had stolen the cell phone from a woman who was walking in the Alameda of Santiago de Chile.

The video of that fact was massively disseminated on social networks. In the images you can see the ‘Creole Spiderman’ chasing a man, running at full speed down a central street in the New York neighborhood. Then, help the victim face the person responsible and retain him.

In an interview with the Tele 13 media, Aviles said that, while looking for a place to record one of his videos, he heard that a young woman was desperately asking for help. She felt helpless when she saw that nobody helped her and decided to pursue the suspect.

In those moments, he imagined that she could be his sister or a loved one. “Seeing that nobody helped her gave me helplessness.” He ran five blocks to neutralize the suspect without violence.

Protected his identity and the victim. He did not leave the girl alone until the police arrived, nor did he record the faces of those involved. Hours later, the girl thanked him for social networks.

“Thank you so much for helping me that day! Especially for joining me and not leaving me alone until I can make the complaint. You got involved to help me without interest. You are a big”. The cell phone was not recovered, but at least the complaint was filed and one of the suspects was arrested. Two others managed to escape. Now, the Ecuadorian Spiderman hardly goes out to dance in the street and is more dedicated to producing videos for his social media accounts.

Another of its facets is to give artistic presentations to children in a state of vulnerability in different parts of Chile. For example, in August of this year, he was in a camp of Venezuelan refugee infants in Tacna, border with Peru.

Also, the superhero went to the protests of the last days. In a video you can see it hanging on a pole, with a flag of Chile and dancing. Below are thousands of people in Plaza Italia.

“People love me, I have participated in the mobilizations, but not fully because they demand their rights and my videos exceeded the purpose of the march, the main claims.”

Aviles lives happily in Chile and his family in Ecuador looks closely at what he does. His parents learned what his son was doing just the previous year. “They saw a video of a Spiderman dancing and they said ‘it’s you’ because they know my way of moving, I said yes.

They read my story and are very proud of me. ” Every two years he returns to Guayaquil to visit his family. Now, his goal is to entertain the public with his character and continue with the social work.

Also continue with your messages in which you promote respect and care for the environment. In one of his videos, Aviles comes down to the banks of the Mapocho River and collects the garbage with a group of young people. “I hope that the people who pass through the bridge of peace do not throw waste. Awareness please, ”he claims.