The sun would burn the earth according to astrophysicists 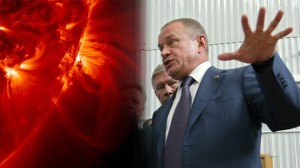 Russian spacecraft builder S. P. Korolev Space Corporarion and Rocket Energy has echoed an alert launched by astrophysicists, which, according to their predictions, the sun will burn the earth.

Because of this threat, the President of the company, Vitali Lapota, said he believes that humanity must address the question of the colonization of Mars because of the increased size of the Sun and the threat of the Earth being destroyed, reports the Gazeta.ru website.

Astrophysicists assume that our star will begin to expand in the next million years. Because of its increased size, the sun will absorb Venus and the Earth”, said Lapota . According to the specialist,”it’s one of the most realistic forecasts for the next few hundred million years”.

After these declarations some critics emerged arguing that there is some starving people and all they care about is adaptation to Mars.