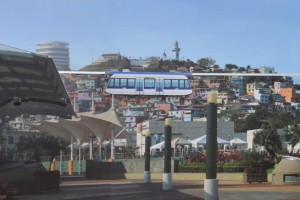 The Air suspended transport of Guayaquil will depart from Samborondón and Durán.

Mayor Guayaquil Jaime Nebot announced on Wednesday the existence of an agreement with the mayor of Duran, Alexandra Arce, to make viable the Airway project, with airborne buses.

The suspended railway will have two routes: one that will depart from Samborondon and the other from Duran, joining both at Malecon Simon Bolivar, to continue towards the Quito street, where there will be a station for users who go to the Luis Vernaza hospital and the university. Then, the route will go down to the Plaza del Centenario, where passengers will be able to take the Metrovia of that sector.

Next May 20 studies with observations made on 5 March will be delivered. From that date biddings will be convened until late July.