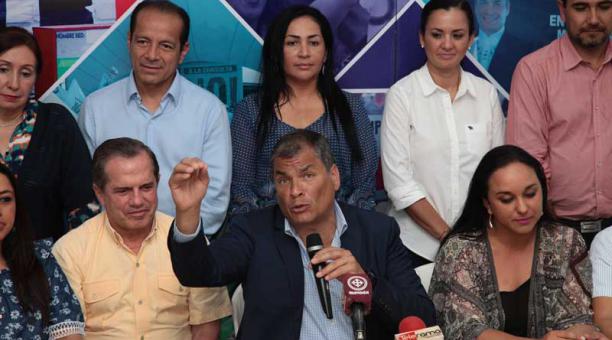 The Contentious Electoral Tribunal (TCE) dismissed the appeal filed by the legislator Gabriela Rivadeneira, against the qualification of Alianza País to participate in the electoral campaign for the yes, in the referendum and referendum.

This is the last instance in electoral matters. The Plenary of the organism decided this afternoon, January 15, 2018, that the appeal was inadmissible because Rivadeneira does not hold the position of Executive Secretary of the political organization. She presented the final appeal on December 12, 2017.

The objective was to annul the resolution of the National Electoral Council (CNE), of December 9, in which she qualified the ruling party at the request of Ricardo Zambrano, executive secretary in charge of AP. The ruling ratifies that the verdeflex movement is in the hands of the board of directors that supports President Lenin Moreno and that took control on November 23, since it is the one that has the active legitimation and legal representation of the group. For which she was able to register her with the CNE to receive the electoral promotion fund and campaign.

Likewise, the TCE agrees with the Ethics Committee, chaired by Mary Verduga, who suspended nine members of the movement for six months, among them Rivadeneira, Doris Soliz and Ricardo Patiño. That is, they temporarily lost their rights as permanent adherents. Currently, all this pro-government faction is leading the electoral campaign for the no.

Despite this, the correísta directive of AP, headed by Rivadeneira and Patiño have maintained control of the political headquarters in Quito. Although Secretary Zambrano confirmed that they do have the legal documents to be able to recover it. The sentence was notified to the parties involved. Immediately, former President Rafael Correa reacted on Twitter. “The gift of the traitors is the theft of Alianza País,” he said, “they will be able to steal AP, but never our will and convictions.” (I)

Daniel Noboa Azín and Gabriela goldbaum got married in Salinas