The vindication of the first castle 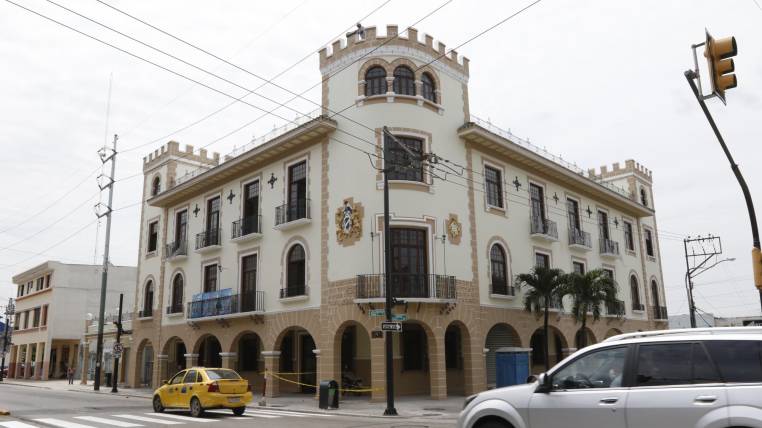 It was a long-term promise. Eight years after its expropriation, the castle José Martínez de Espronceda, that striking building in the El Astillero neighborhood, which rises in the streets of Eloy Alfaro and Venezuela, receives with its recovery, a claim as the patrimonial asset that it has been since 1990.

The past will remain forever: the apartment building, as it was born in the thirties; and the den of indigents, drug addicts, lustful couples and rat breeding, in what became the five years following 2011, when the municipality, apparently, left it forgotten, after having announced the project of building a library in that area.

The contract for the recovery of the asset, amounting to 623,346.58 dollars, was signed in July last year, but it is only until this April when it is confirmed that, in addition to the work being completed in its first phase, the original plan will be maintained. But no longer in the three floors he owns, as had been thought, but only on the ground floor, the Culture Director of the Municipality confirmed to EXPRESO, Melvin Hoyos.

The castle is one of the first buildings in the city that used imported concrete for its construction, designed and completed by the man to whom Guayaquil owes, also, the building of the second part of the cathedral, the Spanish architect Juan Antonio Orús.

The Spanish raised the good at the request of his countryman, José Martínez de Espronceda, a prominent businessman of the middle of the last century who was the owner of ‘La Frutal’ and the soda Fox, whose factories worked in the back of the castle.

Hoyos justifies the backwardness of these years. “It was necessary to study the slab over and over and over again to see if the library could finally be placed on all three floors,” he explains, and recalls that after these analyzes it was determined that the bases of floors two and three would not support the deposit of books. Therefore, they will only stay on the ground floor. In the rest of the floors, it advances, other municipal departments will work.

The architect Johnny Ugalde, cataloguer of real estate of the National Institute of Patrimony, considers a success to combine the uses. “It is a unique building, in a curious way, with aspirations of nobility, a landmark of El Astillero, an element that marks an urban area through its architectural development.”

The historian and professor Alberto Sánchez coincides with him. “That project already has some time and is a must for the library. It is very well decided. Guayaquil must already build a cultural center with a modern library. ”

As it is great, Hoyos describes, “it will allow us to carry out the project as we had planned. In the corner of the ground floor, the library, attached to this, where there is now a metal door, there will be a glass to give access to a distribution hall that will give the library and the library of the library of national authors Carlos A Rolando, who moves to the castle with a reading room included. ”

There will be an area of attention to the public that will assist those who come to consult the historical archive of the city: colony, Republic, archives of the Government, of the secretariat until 1950 and genealogical file. In addition to a book cellar of the municipal editorial program and a space for the National Academy of History chapter Guayaquil.

“It will be an ideal site for researchers. It will become the largest library of authors in the country, after the Aurelio Espinoza Pólit, of Quito. There is still no opening date, because it is necessary to finalize details.

Memories and nostalgia wrap their walls

She arrived there in the early 90’s, when she was a little girl of just four years old. The walls of that building saw her become a teenager. She smiles when she remembers that, in those days, she felt like a princess for living in the castle.

There were not many inhabitants at that time in the El Astillero neighborhood, but a lot of fluvial life. From the huge terrace of the castle of Espronceda I could see a large part of Guayaquil and its river.

Carolina Guadalín is a member of one of the ten families that lived in the castle before its expropriation, in 2010. They were like a big family. Remember the huge rooms of the apartments, all the same, the wide stairs, the masonry details …

Space is the strangest thing that was his house for 17 years. And how strong the structure was. “With walls so wide, they did not feel the tremors.”

The news of the recovery fills her with nostalgia. She lived the golden age of the castle and saw with sadness the decline that happened a few years ago. She is glad that they have recovered it, although she would have preferred to keep the departments. After all, the castle, she argues, was born as a house. (I)