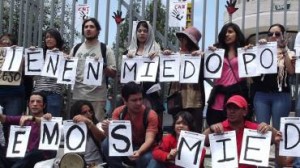 Delegates from the collective YASunidos could not enter yesterday to the verification of the forms presented to call a referendum, which will ask if the Ecuadorians are or not in accordance with the exploitation of oil in the Yasuni.

With posters and drums they came from 08:00 to the exterior of the former commissary of the armed forces, in the North of Quito, where the National Electoral Council (CNE) made the revision, but the military closed them doors, generating the verbal rejection of activists.

Diego Tello, Coordinator of the CNE, explained that the YASunidos were invited to a training which is credited to 200 observers, but supposedly not attended.

Instead, the Amazon defense front – which promotes ‘zero extractivism’-, had observers. It was intended that the verification of forms for this Organization ended yesterday.

The next step is to verify that the forms they were filled on the dates stipulated for the collection and then check the data and headings of those who are responsible for the documents.

The process for YASunidos could be extended until the end of next week.