There are doubts on mortgage credit funding 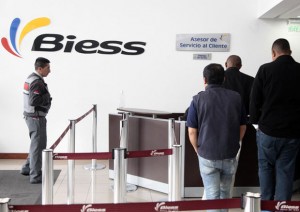 After the president Rafael Correa stated the measure that allowed real estate companies and users to do legal proceedings previous obtaining a mortgage credit through the Bank of IESS (Biess), questions on how would the values would be financed appeared.

Home sellers said that clients do not always have the funds to pay an average of  USD 3000 (depending on the home house) in documentation and notary´s office. Instead, property developers of new houses indicate that they can assume the cost of the procedures and then submit the invoices to the Biess, which eventually would be charged to the client´s credit.

The idea of making this change is to reduce delays in loans. Patricio Carrillo Jara, real estate broker, says that delays in documents processing could lead customers to desist of buying a home .

He adds it is a good option that the affiliate chooses the law firm or the notary´s office, but believes that funding can be a problem. He considers the Biess could create a system in which the user makes the process in endorsed entities and then the two institutions handle the securities that will be added to the mortgage.

José Furoiani, from the Furoiani Construction Company, says they currently have at least 200 mortgage loans that have not yet been disbursed and sometimes the process has been delayed up to seven months.