There are new directorates in the Alianza PAIS movement 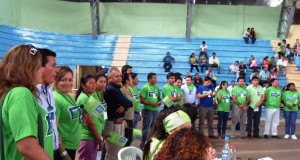 On Saturday, November 22, the militants of Alianza PAIS (AP) closed their cantonal directorates elections. In over a hundred different points of Ecuador, conventions of the government movement were installed, where there was an extensive involvement of the bases .

In Guayaquil, in the coliseum Abel Jiménez Parra, took place the voting of the direction of District 3. And on Saturday, November 15, was conducted the voting of districts 1 and 2.

Meanwhile, in Ambato, a disagreement with the vote Luis Criollo (533 votes) was recorded. This led the claim of the groups that supportedother candidates, one of this groups commented that people had been addressed to win votes.

Marcela Andino, President of the Electoral Tribunal of AP, said that every process has its ups and downs, it must be identified in the movement there is a process of formation that involves going to elections, and that one should wait until the winners are defined.