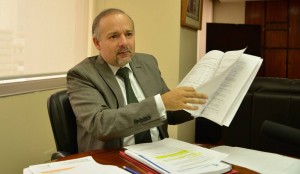 The deficit of the health insurance is between $ 600 and $ 700 million, said the President of the Board of IESS Richard Espinosa in an interview with El Universo, he said that to cover it, a reform of the distribution of contributions of members has been done.

In terms of health they pay $ 2.100 million a year, “of those, about $ 1,400 million are expenses of our own infrastructure and $ 700 million for private providers,” Espinosa noted.

He discarded that the attention of affiliates´ children and and the debt by assistance to retirees generated the deficit. Instead, “from the expenditure of $ 2,100 million, the assistance to children under 18 is $ 180 million; hence deficit  is not here,” he said.

Espinoza said about the debt, according to a privatization law of 2001: “the state will pay, the central government will not pay. Then we could have absorbed $ 1,700 million and the Council could have made a reform to raise the contribution to health and make the employers pay. But the worst part is that this was never registered.”

Finally, he explained they will compensate the deficit with more hospital infrastructure, “we will provide the service directly, and occupy less private clinics. We want to raise performance which is now 8% to 14% or 16%.”