There will be soccer, referees will work 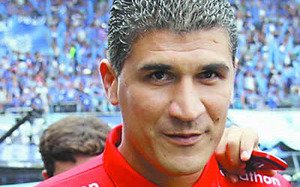 The president of the Association of Arbitrators of Ecuador, Alfredo Intriago, announced that an agreement was reached yesterday with Ecuafutbol and they will not paralyze any of the tournaments organized by that soccer institution, which is assured that if they play matches in the Ecuadorian soccer championship according to the schedule.

The referees maintain their position of not whistling at the club Pilahuin Tio, Imbabura, and FEF will seek a legal solution to tight and the sanction applied last week to play the rest of the championship in the second category without public when they have to play at home, mainly as a result of some members of that club that incited public violence during the game against Delfin, when they tied 2-2.

The date 18 of the second stage, which will be played this weekend includes parties with Independiente with Macara in Ambato, Universidad Catolica against Liga de Loja in Quito; Emelec will receive Deportivo Quito in Guayaquil, while Manta faces Deportivo Cuenca in Cuenca; Liga de Quito and Deportivo Quevedo will measure their game in Quito and El Nacional will receive Barcelona in Quito.