These are the companies that owe $ 160 million to the CFN

The large companies that owe the National Finance Corporation (CFN) more than $420 million are beginning to have a face. An identity that, beyond their names , reveals the condition in which their businesses incur. Of the hundred companies that today monopolize this portfolio of difficult collection, only 12 prove to be up to date in their declaration and payment of Income Tax (IR) . There are others with a history that links them to investigations for corruption schemes such as the Isspol case, Bribery or Las Torres. 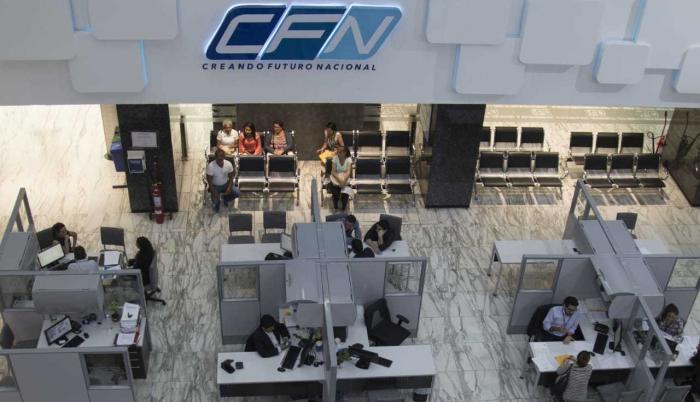 The entity has initiated 1,205 coercive lawsuits to recover the borrowed money.

On April 14, EXPRESO released a preliminary X-ray of these signatures. Today it is known that of the total debt, 11 companies concentrate the largest unpaid amounts (they are 40% of that portfolio, see graph), with figures ranging from $7 million to almost $50 million . The Hotel Sail Plaza Manta Mercantile Trust, which owes 42.1 million, heads this ranking, but is followed on the list by Sonino SA (with $19.3 million); Ginsberg SA ($13.3 million), Industrias Oleana ($12.4 million) and Equitesa SA(with more than $11 million).

According to public information from the Internal Revenue Service (SRI), most of these firms that would have benefited from loans that were delivered between 2014 and 2019 under flexible and non-technical requirements, would have been dragging, according to the numbers, a weak financial situation : there is a majority that declares $0 income tax since 2011. Others, even since 2002.

EXPRESO sought to have contact yesterday with the main of these 11 companies that own the largest amounts, but there was no response. But although the lack of a long-standing tax contribution draws attention, the indiscriminate delivery of credit should be of concern, which past administrations, throughout the governments of Rafael Correa and Lenín Moreno , would have executed in favor of companies with a history of which are now questionable.

In the main ranking of companies that owe the most is Equitesa SA , which owes $11.9 million, and whose main shareholder, Pedro Verduga, at the time was sentenced for the Bribery case , for paying bribes in exchange for benefiting of state contracts, during the Correa regime.

Next on the list is the case of Centridagsa SA , a firm that operates in the real estate market that today not only accumulates a pending amount of $10.3 million before the CFN, but also a bad record with its Villa Hermosa (Durán) real estate project that still It has dozens of injured parties waiting to receive the return of the money that, years ago, they invested in the payment of a house.

According to data from the Superintendency of Companies, Enrique Heraclito Weisson Accini appears as one of its main shareholders. Weisson, who is in Spain, is one of those prosecuted for the failed investments that affected the Social Security Institute of the National Police (Isspol) . Just last March he signed an effective cooperation agreement with the State Attorney General’s Office, to clarify his management as former manager of the Ecuagran grain company, which still owes police insurance, but also to CFN.

Yes, although with a smaller amount, Ecuagran also appears on the list of major defaulters, with a pending amount of $1.8 million. The firm that today is in liquidation, has José Ibáñez as its main representative. How feasible is it that that almost $2 million will be returned? Ibáñez claims not to know. “The first question I have as liquidator is why did the CFN invest in a bankrupt company? Why, being a bank that is supposed to have a risk area, did you agree to give him (between 2017 and 2018) that credit? Ibáñez mentions that right now it is not feasible to pay off that debt because “its only asset, which is the plant, is under a fake trust… We are working for its reactivation to pay, but while it is in liquidation it cannot operate either.”

To the companies that face legal actions, NoLimit is also added , linked to the trial that follows the Las Torres case , in which its principal has already admitted the illicit payment of $ 8.8 million to former officials of Petroecuador and the Comptroller for get the public company to cancel the forms pending settlement of contracts. The CFN is owed $1.4 million.

To recover this portfolio of $420 million, the state bank has initiated coercive lawsuits. In past interviews, Iván Andrade, current president of the entity, has admitted that this portfolio becomes difficult to collect “because we have to enter a legal process and because we have to check whether the assets (which have a useful life and changing value) serve as collateral to cover the debt. Of the 100 cases, there are already eight suspended because the debtor filed some legal action.

COMPANIES AND NATURAL PERSONS. Of the 100 debtors, 83 are companies, several of which are under investigation for corruption schemes such as the Isspol or Las Torres cases. The rest, 16, are natural persons.

PROVISIONS. The high unpaid portfolio, due to credits granted irregularly between 2014 and 2019, has forced the CFN to provision nearly $600 million to cover possible gaps. That money hopes to recover it with coercive judgments.