Titanic Will Not Remain in The Sea 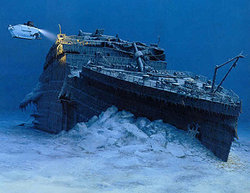 The remains of the largest ship built in the twentieth century, the Titanic, could disappear by 2030. Deep-sea bacteria is eating the steel structure of the ship which sank in 1912; experts identified it as Halmonas Titanicae and it has already consumed 50 tons of iron since the remains were found in the depths of the North Atlantic sea.

The president of the Irish Titanic Historical Society, Ed Coghlan, said the research, “confirms what divers who descended to the depths of the sea, the vessel is disappearing.”

“Fortunately, the ship has been photographed extensively and there are amazing videos and pictures that show how the Titanic was under water, so there will always be evidence of that. Although in the future, people will say it was a pity that there was no further effort to preserve it,” said Coghlan.
A team of scientists says that if no actions are taken to preserve the remains of the Titanic, it will be gone forever in about 20 years.