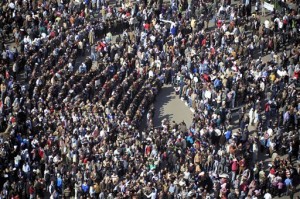 Today on the eleventh day of the Egipcian mass protests, thousands have been gathered in a mass prayer where Muslims, Christians, men, and women are participating to take out of power Hosni Mubarak, who has ruled the country since 1981.

The “Day of Departure” is the name that the protestants have assigned to this day, because they assured that the president will leave the power today.

In the Square of liberation an atmosphere of happiness, joy, and peace is being lived. Today the Army has stepped up the entrances to the Square to intensify the control and they allow the access of people to the Square one at a time, which has resulted in numerous queues. The protesters were also checking this morning the identity card of people who accessed the spot, because they want the Police or government service agents out of the place in order to avoid disturbances like those endured yesterday.

While international reactions remain, the European Union supports “a substantial democratic reform in Egypt” that collects “the democratic aspirations of citizens”. UN High Commissioner for Human Rights, Navi Pillay, has called for an investigation about the violence of recent days to know if it was planned and by whom. The U.S. government reported that the administration of Barack Obama is talking to the Egyptian Executive in order to ask Mubarak to resign “immediately” and to form a government backed by the Army to prepare the country for elections in autumn. The White House fears that the violence can spread in the region.

There is no greater presence of violence; however, it has been warned that several Mubarak supporters have arrived to Tahrir Square and have staged some early clashes with opposition demonstrators in the adjacent areas. Meanwhile channel Al Jazeera has reported that their Cairo offices have been raided and looted. Democracy activist, Asma Mahfouz, told to BBC she has received death threats from members of the ruling National Democratic Party (NDP).

At this moment the protest leaders are considering marching to the presidential palace, which is at eight miles from the square, but some of them are afraid that the action may dislike the government and unleash another bloodbath.

The Egyptian Vice President has asked people not to participate in more demonstrations; however people are still arriving trough the bridge Qasr al Nile.