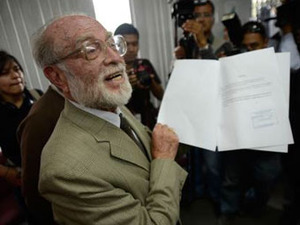 Until today the Assembly may submit written comments to the report for the first presidential debate on the request to declare as national interest the blocks 31 and 43, within the Yasuni National Park. They had been given a period of three days.

Before this the Constitutional Court (CC) has not made ​​any ruling on the constitutionality of the question asked by the group Yasunidos, within 20 days, for this is understood “that there was a favorable opinion.”

This was clarified by the lawyer July Cesar Trujillo, who asked the question: “Do you agree that the Ecuadorian government keep the ITT oil, known as Block 43, indefinitely underground? Yes-No.” With this question they are looking to call a referendum to stop the exploitation of Blocks 31 and 43 of the Yasuni National Park.

Trujillo arrived to the CC in the company of activists to demand the availability to of the National Electoral Council (CNE) to deliver forms to collect the signatures required to fill the referendum. The question asked by the lawyer was launched last August 22 and so far the petitioners say they have not received any notice of the procedure that was given, therefore, according to the Jurisdictional Guarantees Act, the opinion would be favorable.