Todd Chapman: ’10 issues must be resolved before going to the commercial agreement ‘ 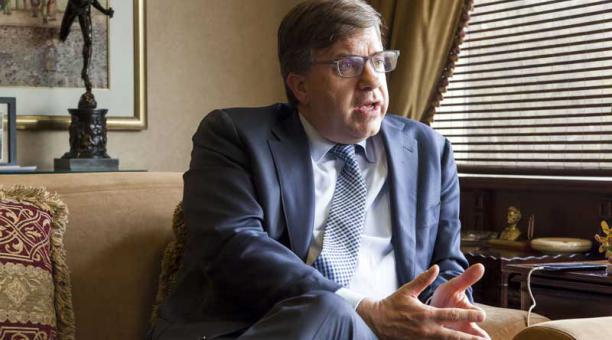 Interview with Todd Chapman, US Ambassador in Ecuador.Ecuador announced that it wants to go to a commercial agreement.

What steps must be followed?

How can Ecuador advance in that agenda?

Understand where your current situation is and identify which irritants need to be worked on to extend this relationship. The Deputy Minister of Foreign Trade, Humberto Jiménez, went to Washington two weeks ago to discuss these issues.

What are these irritating topics?

There are 10. Among them, the customs fee, which is something that worried a lot; the creation of new barriers; lawsuits involving US companies; patents; intellectual property to software, to music, to videos. I was in Manta over the weekend and there are USD 1 records that can be purchased. That is something that has to be worked on. It is a subject to solve.

Is Ecuador open to resolve these issues?

The relationship is very open with the Ministry of Foreign Trade and that is important to find arrangements.

There was talk of forming the Council for Trade and Investment. Is that going well?

That is an option. This Council already existed, but has not met since 2009 because there were no agreements to discuss these issues. Now we are looking at the possibility of starting this more formal process and finding a solution to those 10 items. With these irritating issues, can Ecuador remain within the Generalized System of Preferences (GSP), which is about to be approved and which allows the entry of products without tariffs to the US.

The GSP was approved in the House and is now in the Senate. There is an expectation that it will be renewed, which will allow that range of products to be free of duty, but it does not mean that it will be forever, because there are requirements to be met and that must be done by Ecuador.

Can the GSP be lost? That’s why we talk so much to overcome the irritants. It is important that the work be continuous and joint to reduce those probabilities. Ecuador expected tuna, roses, broccoli and artichokes to join the GSP, but it was not achieved. Why? It is not a good strategy to ask for more access to our market and at the same time create barriers. It is better to work to lower barriers and maximize access to markets.

In the forum of Davos USA he spoke about America First. How would that protectionism be reflected in an agreement with Ecuador?

I would not say that. I believe that America First’s policy is the policy of a government that wants to promote the interests of its citizens. When working in the area of foreign trade, the best agreements are those that benefit both sides and that is important to emphasize.

How much does Venezuela and Assange weigh in the bilateral relationship?

We talked about many issues of foreign policy, education, fight against drug trafficking and that is what is important. In Venezuela we continue to be very concerned about the issue of human rights, democracy. It is important that everyone come together to draw attention to the injustices that are happening in that country.

How is the cooperation of the US?

We have worked very well for many years. We have a concern about drug trafficking, which is negatively impacting Ecuador as well as in my country. That is why, with the Ministries of the Interior and Defense and other actors, we are cooperating with Intelligence, with training for the police.

In addition to Intelligence, is there equipment delivery?

This week we are giving training courses in Guayaquil, for people who analyze documents in the port.

Is the training for police and military?

We are working with the police. But once in a while we have courses to help the military.

How have you seen the San Lorenzo attack?

Very unfortunate. I am very sorry for the violence we see in San Lorenzo. We respond with the team of specialists, to help with the investigation. But I think it’s a very dangerous thing for Ecuador, that this type of violence, which is more common in Colombia, is coming here. We all must fight drug trafficking.

Charge: US Ambassador in Ecuador since January 2016.

He has an extensive diplomatic career. He was Deputy Assistant Secretary for Political and Military Affairs in the State Department and participated in missions in Brazil and other countries. (I)

The coca guards attacked the military