Tomorrow is the deadline for the extradition of Galo Lara 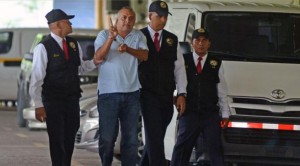 The deadline for the extradition of former legislator Galo Lara, former Ecuadorian Prosecutor, requested by the Foreign Ministry of Panama is tomorrow.

On June 11, the Criminal Chamber of the Court of Justice of Panama ordered preventive detention for a period of 45 days for Lara, which began to run from June 12, while the Panamanian Foreign Ministry decided on the issue of extradition.

Since the arrest of Lara, his defense filed two resources to try to stop his extradition.

The first was a warning of unconstitutionality, since according to the lawyer of the accused in Panama, José Brandao, with the resource it is warned “a possible constitutional crime” if the Foreign Ministry authorizes extradition without notifying the defense. The second is an habeas corpus.

General Attorney Galo Chiriboga said that for him, the possibilities of not extraditing Lara, “would only obey to a failure from the point of view of the documents Ecuador submitts.” Chiriboga questioned that Lara could be favored with refugee status.

“It would be inconsistent for a country that already denied territorial asylum to grant him a refugee status,” he said on his Twitter account on June 12.