Tornadoes in USA Destroy Everything 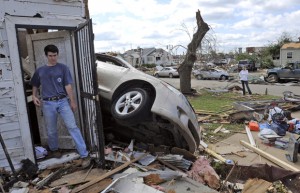 Broken trees, advertising signs, and turned over cars, have destroyed entire neighborhoods of the Southeast of USA due to the tornadoes. This is the worst storm and tornadoes since 1974. The natural phenomenon is moving from south to north, while claiming the lives of 305 people and leaving several more missing.

More than ten estates faced the sequels of 300 tornadoes that have been registered since Monday in Mississippi and New York. More storms are expected in the southern estates. Meanwhile, the federal efforts focused on Alabama since it is the more damaged estate by the storms. So far 204 people have died in Alabama and hundreds of thousands of homes were destroyed.

President Barack Obama declared Alabama in state of emergency, during Friday morning Obama landed in Tuscaloosa to visit the survivors. The governor of Alabama Robert Bentley informed that 2,000 members of the National Guard are searching for those missing.

Meanwhile weather agencies informed that wind intensity prognosticates an F5 tornado, which is the highest category for these natural phenomena.

In Tennessee 33 people have died, 32 perished in Mississippi, 15 in Georgia, 12 in Arkansas, 5 in Oklahoma, 5 in Virginia, 2 in Missouri, and at least one in Kentucky. This is the highest number of victims killed by the tornado season in the United States.

One Million Believers Will Attend The Beatification of John Paul II