Decree 256, signed by President Lenín Moreno on December 27, seeks to promote Latin American integration and promote a strategic insertion of the country in the international context.

Among its objectives is the promotion of tourism and trade, for which it will work with several State portfolios in the implementation of this provision that is viewed with optimism from several sectors, mainly tourism.

Tourism will be one of the sectors that will most benefit from Decree 256, which provides that Ecuador is a country of open skies, because it opens the possibility that more airlines can open their routes and increase frequencies to the country. According to the document that will come into force after its publication in the Official Registry, this decision will contribute to the development of tourism, commercial exchange, and national, regional and global integration, since a policy of openness to the signing of bilateral agreements is determined with more flexibilities.

The Minister of Transport and Public Works, Paul Granda, explained to EL TELÉGRAFO that the open skies policy aims to liberalize air transport; facilitate the negotiation of traffic rights; the signing of bilateral agreements with each country and the promotion of free and healthy competition in the provision of aeronautical services.

“Among the benefits is allowing a greater offer of flights to and from Ecuador, which will reduce the cost of air transport. It will also help in connectivity with the world by promoting tourism and trade and promoting the investment of foreign capital, which will help us to generate cooperative trade agreements between airlines, “said the Secretary of State.

The results of this policy will be seen throughout 2018 after the bilateral meetings that would be held between the different countries that have an interest in operating in the country, through their airlines. Holbach Muñetón, president of the National Federation of Chambers of Tourism of Ecuador (Fenacaptur), described as positive this decision of the Government and stressed that the open skies policy was a request that the private tourism sector had been making for some years to reactivate the economy and boost the arrival of tourists to the country due to a greater offer and the reduction of the cost of the passage. “Having open skies opens the possibility for airlines to enter Ecuador with fewer obstacles and with facilities for the operation. This is an advance not only for tourism, but in general for the economy of the country, “said the businessman.

Ramiro Crespo, economic analyst, agrees on the advantages that this presidential decree would bring, since international airlines will enter into competition under equal conditions, mainly for the benefit of users. However, the expert considers that the mechanisms to be able to make the presidential disposition viable should be accompanied by a tax reduction policy and also by initiatives that promote competition for local flights and reduce ticket costs. “This decree will help from the point of view of international flights, but the Government should also have a policy to encourage domestic competition. Ecuador must forget about the protection of the national state airline TAME at the expense of passengers, “said Crespo.

In order to promote domestic tourism, the Ecuadorian government has implemented several initiatives in the last six months, the main one being the ‘Great Tourism Fair of Ecuador’, a promotion project that focuses on the local with the support of public and private companies.

The fair offers packages such as ‘Ecuador your way’, ‘Ecuador on your own’ and ‘Ecuador on wheels’, with affordable prices that are sold in more than 1,500 travel agencies in the country. To this proposal is added the second Festival of Live Arts of Loja, which was jointly worked with the Ministry of Culture and generated more than $ 3,000,000 in the 10 days that was developed.

The data reveals that 18,996 people attended the events paid for this artistic festival, 40% more than in 2016. In addition, the event attracted 6,081 foreign visitors, which represented an increase of 52% compared to 2016 estimated that each visitor made an expense of $ 496, for five nights of stay. On the other hand, in order to promote tourism in protected areas in the south of the country, the Tourism and Environment portfolios plan sports and recreational activities in the provinces of Loja, El Oro and Zamora Chinchipe, bordering Peru.

The Ministry of Environment of Ecuador (MAE), with the support of the United Nations Development Program and the Global Environment Facility, launched the new web portal of the National System of Protected Areas of Ecuador, which contains useful information for tourists who want to visit the 51 zones of this type in the country.

In the page the interested ones can look for the tourist sites through three criteria: the region, the province and the management category. You can also find maps, information on how to get there, distances, recommendations, among other useful information.

Protected areas represent 20% of the national territory, with 19 million hectares that house a unique biological and scenic wealth and services that benefit both urban and rural populations.

Another initiative to strengthen the sector is the formation of the academic board of tourism, which will be integrated by 21 institutions of higher education in the country. The new entity will strengthen the collaboration and technical cooperation between the academy and this state portfolio, which is consolidated within the framework of the articulation promoted by this State Secretariat with different tourism actors in the country.

The latest awards correspond to the 24th edition of the World Travel Awards -WTA- that took place on December 10 in Vietnam. Also, in the WTA, South America edition, in which he participated in 26 categories, Ecuador won a total of 14 awards, becoming the most winning country in breaking records in obtaining recognition. Eight of them corresponded to the public sector and six to the private sector. The awards given to Ecuador also came from the prestigious International Living Magazine. Obs. With a score of 90.7 the publication ranked the country in third place in the world as the best destination to retire.

2017 leaves a positive balance in the tourism sector

The incentive to internal mobilization has also allowed a significant boost during the days of compulsory holidays. In eight national holidays (not including the end of the year), of the nine established each year, 7,224,000 internal trips were recorded that generated $ 413,000,000 for the economy of the country, according to figures from the Ministry of Tourism.

During this holiday, the provinces of the Sierra recorded a greater expense, which represented 52, 5% of the national total. During the past year, 12.3 million internal trips were made and 40% of them during the different holidays, that is, around 4.9 million trips.

On the New year’s holiday (December 31, 2016 to January 2, 2017), 618,972 trips were recorded in which a total expense was recorded that exceeded $ 37.6 million. The internal tourist movements registered in 2016 boosted the Ecuadorian economy with $ 285.5 million, thus contributing to the reactivation of production, especially in the areas affected by the 7.8-magnitude earthquake of April 16 last year, according to figures from the General Coordination of Statistics and Research of the Ministry of the branch.

The president of Fenacaptur, Holbach Muñetón, said that the policy developed by the regime causes confidence in the tourism sector and they are hopeful about the reactivation of the economy, especially in areas that were affected by the earthquake on April 16 in the provinces of Manabí and Esmeraldas.

Regarding international tourism, from January to November of this year the country registered the visit of 1,445,988 foreigners, mainly from Venezuela (39,544), Colombia (24,116) and the United States (15,308), surpassing 2016 when they arrived 1’286,242 tourists (see infographic). These figures show that in recent years the tourism sector has achieved important results that are demonstrated in the attention that the world has given to the country. As for the departures, according to the Ministry of Tourism between January and November 2016 1,435,443 departures were recorded; while in the same period of 2017 1,442,635 travelers left the country. (I) 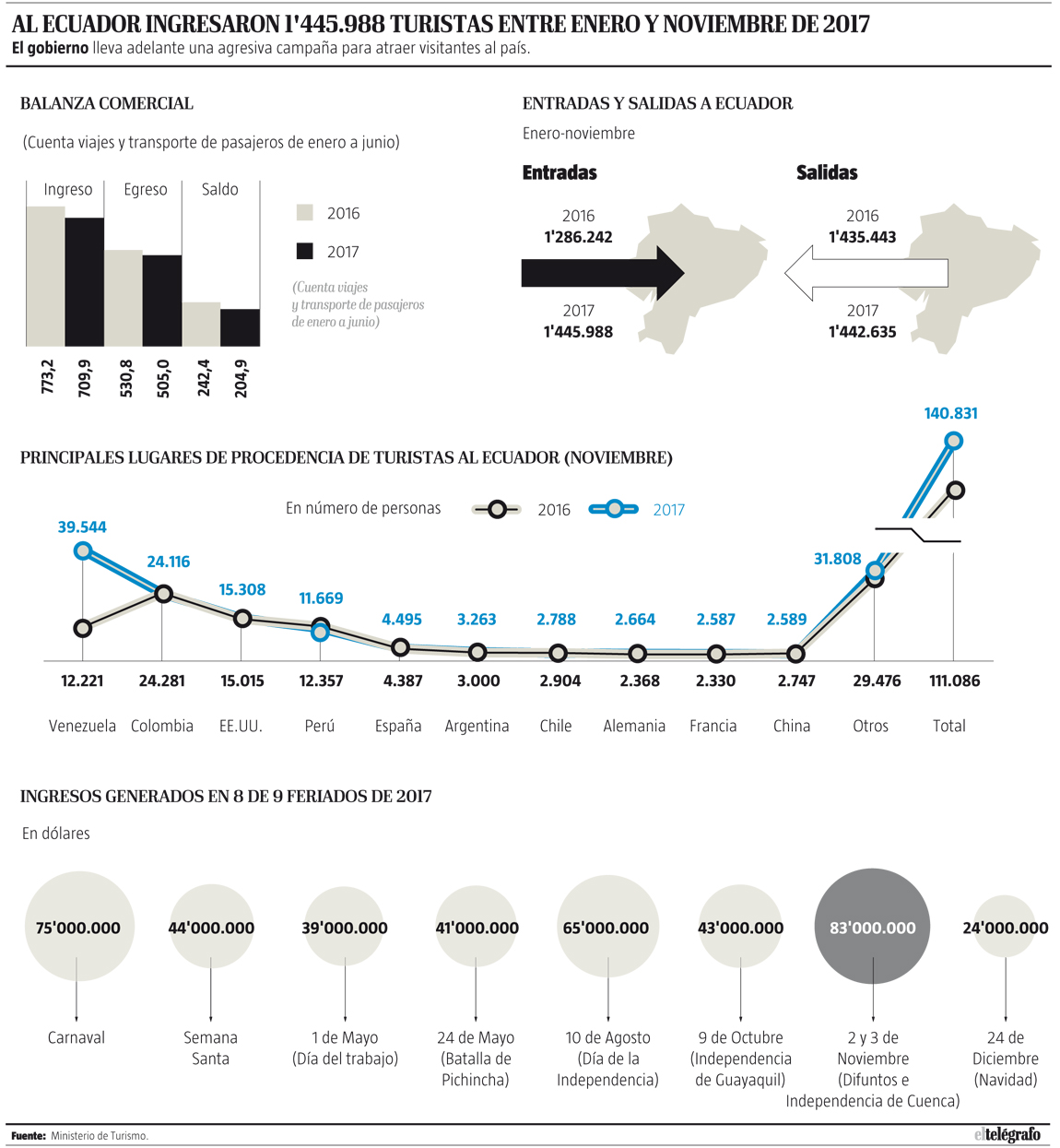