Toy importers feel the surcharges impact in their supply 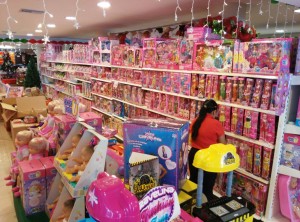 The supply of imported toys for this holiday season would record a decrease of 40% and in some cases up to 80%, according to three of the leading importers of the city consulted by this newspaper: Estuardo Sanchez, Importadora Figueroa and Eduardo Azar stores.

Their managers or owners, indicate that this occurs due to the safeguards that since last March increased the cost of imports to 45%. However, figures from the National Customs Service show otherwise. They show that imports grew by 54% from January to September this year compared to 2014.

They went from $ 29.8 million to $ 45.8 million in 14 subheadings quantified that according to officials of the entity, are not all that include the import of toys.

According to information obtained from the Central Bank, imports in 5 of the 14 subheadings taken into account by the Senae tripled or more in the first quarter of this year.

According to Estuardo Sanchez, this does not fit the reality of importers of toys and other items that, according to him, have diminished their sales and imports. In his case, both fell a 40%.

Ecuador will cover its deficit with more debt