Trade and tourism, the hardest hit after earthquake 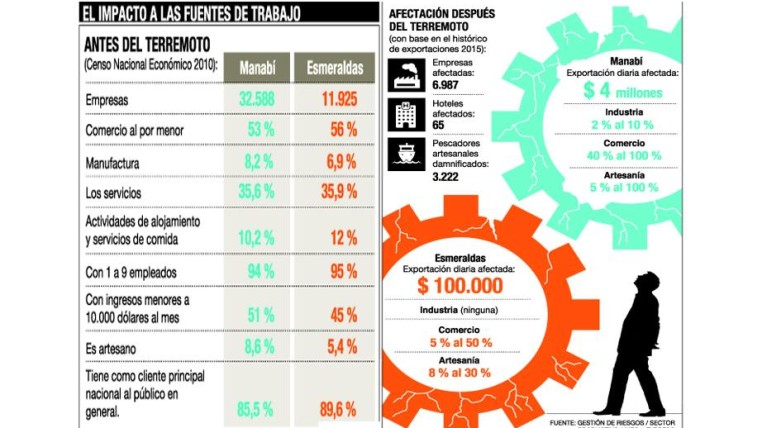 Before the earthquake, Manabi and Esmeraldas had a very similar profile of economic activity. Retail sales, small businesses, low-income and ordinary citizens as the main customers, according to the National Economic Census 2010 (the latest available). After the earthquake, both provinces face similar damage and the same challenge: to raise small businesses that employed their people.

53% of companies in Manabi were engaged in retail sales; in Esmeraldas a 56%. 94% and 95%, respectively, of businesses had between one and nine employees. And about the half generated an income from sales by 10,000 Dollars a month.

These sources of employment, which respond to an entrepreneur profile, were created by people who puts all their efforts to start a business and build a life for many years, but these have been reduced to rubble.

According to the Secretariat on Risk Management, trade is affected in Manabi, between a 40 and 100%, depending on the county. And in Esmeraldas, between 5 and 50%.

More reactions by the Government’s letter to workers

The hotel investment is stopped