Trademarks registered by correa officials, such as ‘forbidden to forget’ or ’30s’, are in the hands of the government and AP 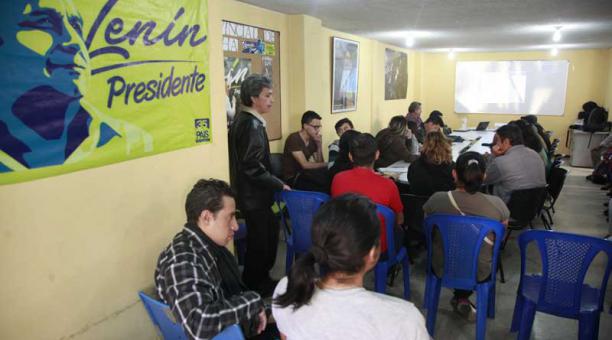 Phrases like: ‘Prohibido Olvidar’ (‘Forbidden to forget’), ‘Ecuador Ama la Vida'(Ecuador loves life),  “30 S el dia en que triunfo la democracia” (’30S the day democracy triumphed’) and ‘La patria ya es de todos’ ( The homelands is everyone’s), they can no longer be used by the Correista faction. They were minted in the government of Rafael Correa (2007-2017) as part of their ideological heritage.

They were legally registered and now their mentors could be exposed to a lawsuit if they use them politically. They could even be criminally sanctioned. Only the government of Lenin Moreno or the leadership of Alianza País, by him chaired, has the right to use logos and brands. The National Secretariat of Public Administration (SNAP) of the Presidency of Ecuador and the General Secretariat of Administration (now assumed by the Secretariat of the Presidency) and the Alianza País Movement registered 27 brands during the 10 years of the previous regime. Of these, 25 were permanently used in political propaganda.

In addition, officials of the Correa regime registered on behalf of dependencies of the Presidency under the category of intellectual property other 26. Among these are songs, books and software. The badges are in the databases of the Ecuadorian Intellectual Property Institute (IEPI).

Its director, Santiago Cevallos, clarifies that trademark registrations are common in any public institution or organization. Before being registered, they go through a background and form analysis to verify that they are different, that they have original graphic representation and that they are not in common use. The characteristic color of the citizen revolution, the ‘verdeflex’, does not appear in the archives of the IEPI. There is a prohibition to grant the ownership of a key to a group or company, unless it is within the logo or a distinctive sign of its own created by the organization.

For the magister in jurisprudence on intellectual property, Patricio Albán, there was a “political component” in the registration of the marks of the previous administration. They tried to prevent someone else from using them, for example, against them. But now it also applies to the Correistas. There was a boomerang effect. Moreno may use, in the way he deems appropriate, several phrases and logos, at least until next year. This is indicated by the Ingenios Code, which in the third chapter refers to intellectual property rights.

In 2019 the registration for the phrase ‘The homeland is already of all’ expires. Others such as ’30S the day democracy triumphed’ and its logo are protected until 2023. Despite the legal prohibitions, the identity of Alianza País is in dispute. ‘Verdeflex’ flags flare in the concentrations of yes and no.

Edwin Miño, director of the AP rural district and campaign manager in Pichincha, causes confusion among the voters, especially in the rural sectors. In the tours through remote areas of the cities have observed green flags with no to the popular consultation. Miño made a public call to the faction that left the political organization to stop using the badges.

“The green hope, Alianza País, belongs to list 35,” added María Fernanda Espinosa, AP vice president. She participated on Friday of a tour to promote the yes in the north of Quito. There, the Morenista groups were observed with verdeflex flags and also with white with tricolor letters (yellow, blue and red). Regarding the possible legal sanctions for using the Alianza País badges, Paola Pabón, from Citizen Revolution, responded: “How are they going to prohibit citizens from using them? Are all of us going to be imprisoned? ” She reported that from February 5, one day after the referendum, they will resume the registration of their new movement.

In a first attempt to achieve official registration, the National Electoral Council (CNE) denied the request. It was argued that the name they hoped to use: Citizen Revolution, although it is not a registered trademark, it “is part of the identity of the pro-government movement”. Pabón, who was the secretary of Moreno’s Political Administration and who later resigned due to the internal conflict, requested a certification from the IEPI to insist before the CNE.

Patricio Albán recognizes that it is not necessary for it to be registered as a trademark. It is sufficient to establish “a link” between the products or services registered in the IEPI that are offered to reject their use legally.

While this process is being aired, the foundations of either front begin to take positions. In the main cities of the country, the members of the committees of the Citizen Revolution related to Rafael Correa have begun to remove the badges that previously linked them with Alianza País.

In the Alianza Pais committees, the face of the former president was changed in the banners and forms, by that of the current President. And the songs that were produced are also being updated, so that the lyrics include current government names. (I)