Transitional provision could be extended to sectional authorities in 2019 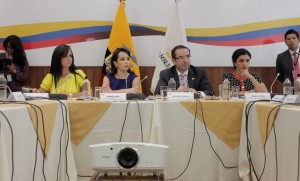 The vice president of the Occasional Commission for Constitutional Amendments, Veronica Arias (ARE), suggested that the transitional provision proposed by President Rafael Correa to exempt him and the assembly members who have served two terms in a row from indefinite re-election, is extended to the sectional authorities in the 2019 elections.

Arias said that this is an idea that would be part of the debate in the Commission, which yesterday began the process to prepare the report for the second debate of the proposed 16 amendments, prior to the reading of the systematization of citizen dialogues held this year around the country and the draft report.

His suggestion was supported by Juan Carlos Cassinelli (AP), President of the Commission: “It is an issue that is not yet discussed … If this occurs in 2017: this should also be given for 2019 which is the immediate electoral period for mayors, governors … ”
Source: http://www.eluniverso.com/noticias/2015/11/17/nota/5246010/transitoria-podria-ampliarse-2019-autoridades-seccionales