The recent wave of murders in Bogotá has the Tren de Aragua as responsible. It is a Venezuelan criminal organization that is led from prisons and would be present in Ecuador since 2020. 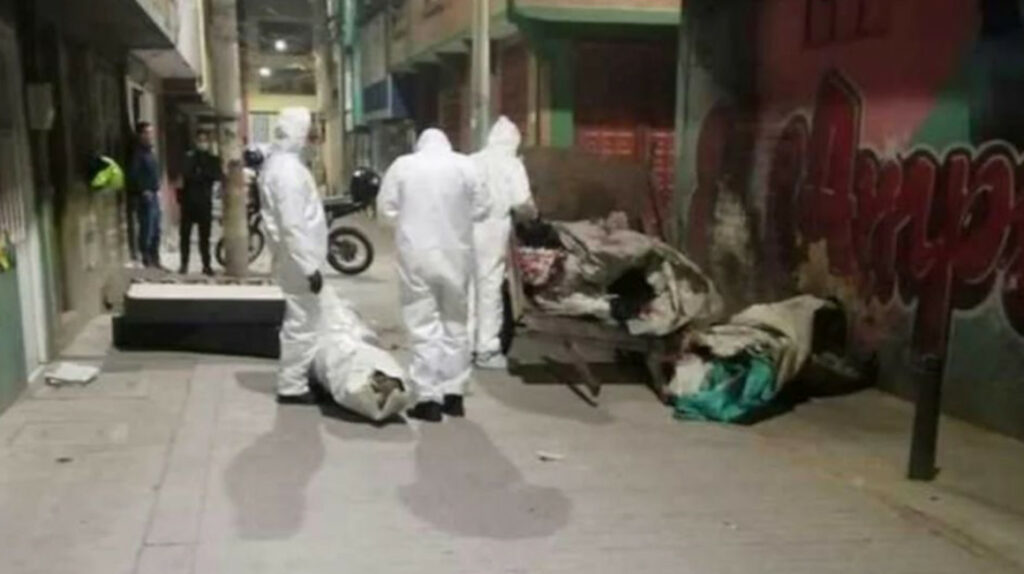 Colombian experts carry out the removal of the dismembered bodies found in plastic bags, on August 25, 2022, in Bogotá (Colombia).

The discovery of 23 dismembered bodies inside plastic bags, in different urban areas of Bogotá, raised the alert of the Colombian authorities.

Claudia López, mayor of the Colombian capital, assured that the orders for these murders came from the Tocorón Prison, in the State of Aragua (Venezuela). And they were given by the leaders of the criminal gang called Tren de Aragua.

In addition, the crimes would be related to the control of micro-trafficking.

Tren de Aragua was born and is directed from Venezuela but has been present in other countries in the region since 2020, although there are few official confirmations.

Colombia and Brazil are some of the countries that follow the tracks of the band, as reported by the non-profit organization RunRun .

While the Review Week of Colombia published an investigation on the so-called black hotel. It is a property in the center of Bogotá, which was used as a center for torture, homicide, kidnapping and drug trafficking of this group.

According to Venezuelan intelligence reports, the regional expansion of the Aragua Train goes hand in hand with the migratory exodus of citizens of that country. The criminals camouflage themselves among the migratory caravans to Colombia, Ecuador, Peru and Chile.

Precisely, members of these gangs have already been traced in these countries.

Along the way, the criminals extort money from the migrants and charge them money in exchange for allowing them to travel with the group.

The members of the Tren de Aragua are involved in drug trafficking, migrant smuggling, and recently hired assassins and torture.

The trail in Ecuador

As Venezuelan intelligence points out, in Ecuador suspicions of the presence of the Aragua Train are linked to migration. And they started after the restrictions due to the Covid-19 pandemic.

On November 17, 2020, in Tulcán, capital of the border province of Carchi, the Police arrested nine Venezuelans allegedly members of the Aragua Train .

According to police records, the subjects were extorting interprovincial bus drivers. The objective of the gang was to control the bus terminal internally to use it as an operations center for illegal activities.

The book Peripheries: Chronicles of Invisible Ecuador , published by the “Journalists Without Chains” Foundation, closely followed this case and tracked down those involved. They all had one thing in common: they were originally from Aragua, in Venezuela.

This cell was led by Jesús Eduardo Ramos Fragachan, alias ‘Loro’, who is wanted by the Venezuelan authorities for the murder of a sports trainer in the capital of Aragua state, in July 2020.

The investigation also found that Antonio José Torres, alias ‘Toñito’, another of the detainees, is wanted in Aragua for extortion and kidnapping. While José Gregorio Flores is required for homicide and also belongs to the Aragua Train.

The Venezuelans were sentenced to one year in prison, which they served in Tulcán. Since then, no new criminal records have been recorded in the country.

Currently, according to agents consulted by PRIMICIAS, there are no conclusive indications about the operations of the Aragua Train in Ecuador. But there are several “loose data” that have generated lines of investigation.

For example, the participation of Venezuelan hitmen in several crimes committed in Manabí and Guayas and that are linked to drug gangs is analyzed.

InsightCrime, an international organization dedicated to security and organized crime studies, published an investigation on the Tren de Aragua in October 2021.

The document identifies it as the most powerful gang in Venezuela and with the greatest projection in the criminal orbit of Latin America. The group is dedicated to extortion, kidnapping, homicide, hitmen, vehicle theft, drug sales, arms trafficking, human trafficking, food smuggling and fraud.

This band was born in the early 2000s during the government of Hugo Chávez, who promoted the Railway as an emblematic work.

The union of workers of the project began to commit crimes with the sale of jobs and then evolved towards extortion, robbery and kidnapping.

According to the report, the Tren de Aragua was strengthened with the arrival of Tareck El Aissami to the Aragua state government. El Aissami was also Vice President of Venezuela, Minister of Justice and the Interior during Chavismo.

During his time at the Ministry of the Interior, the ‘pranato’ emerged in Venezuelan prisons. This practice refers to the control exercised by criminal gangs in prisons. Each jail is led by a finished prisoner or born murderer (PRAN).

Guerrero is responsible for the growth of the gang as a result of extortion charges called ‘causas’. According to information from local investigations, the Tren de Aragua charges each prisoner USD 8 per week.

In the Tocorón prison alone, where ‘Niño’ Guerrero is, there are about 2,700 inmates. That is, he receives about USD 100.00 per month and more than USD 1 million per year.

According to official calculations, this organization has about 3,000 armed members, all of them charging for the “cause” in the region’s prisons.

Ecuador proposes anti-drug strategy, although the US has not yet joined