Troops return from the border with Ukraine by order of Putin 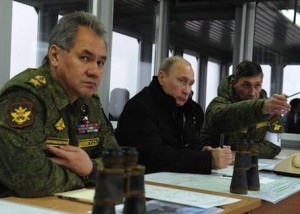 Russian President Vladimir Putin ordered  Defense Minister Sergei Shoigu to make return to their bases the “participating troops on maneuvers on the border with Ukraine,” according to the press service of the Kremlin.

Putin participated in a meeting of the Security Council in the city of Sochi, on the Black Sea, before leaving to China on an official visit.

This is not the first time that Russian leaders claim to have removed the mobilized troops on its western border , which have maintained in tension to Ukraine.

For his part, the General Secretary of NATO, Anders Fogh Rasmussen, has denied this Monday in Brussels that Russia is carrying out the withdrawal of its troops.

“I think it’s the third statement by Putin about it and we have not seen any evidence that the Russians have begun to withdraw its troops,” had pointed the leader of the military organization while recognizing the “importance” of the gesture in case it is done.