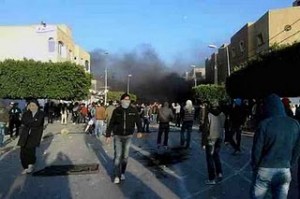 Over 33 relatives of the runaway Tunisian president Ben Ali were detained, and one of the ministries that kept his job was forced to resign yesterday in hopes of calming the people’s contempt. The new cabinet reunited for the first time even when over a thousand demonstrators reclaimed the presence of Ben Ali collaborators.

In an effort to dismantle the crisis, eight ministries of DCR (Democratic Constitutional Reunification), revealed that the members of Ben Ali party are leaving their jobs at the same time the bureaucratic party was disbanded. One of those ministries, Zuheir M´dhafer also presented his resignation.

The government offered amnesty for all the political parties, even to the illegal Islamic opposition. The demonstrators complained that only a few of the incarcerated by political reasons during the 23 years of Ben Ali government have been released. Meanwhile several judges and lawyers reclaimed “the independence of justice,” and the resignation of a magistrate accused of working for Ben Ali and his family.

A week after the escape of Ben Ali, Tunisia now commemorates the first of the three days of national mourning. This action was taken by the government to honor those that perished during the popular revolt. According to the report of the UN several hundred died.