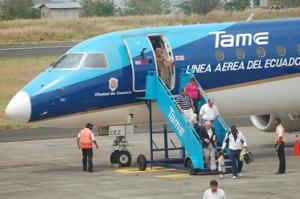 Two airlines announced the opening of new international routes from Ecuador during 2014.

One of them is Tame, state airline, which is ready to start flying to Fort Lauderdale, Florida (USA). This was announced in recent days by Fernando Guerrero, head of the national airline. Tame currently flies to nine international destinations and the route to Fort Lauderdale will be the second on US soil after New York.

Julio Gamero, Vice President of Business Units of Avianca in Ecuador, says that the company plans are framed within the consolidation of the operational part and strengthening the national and international business sector. “To do so in September we are receiving an Airbus A320 (…) which is added to the fleet of the airline in Ecuador, so we’ll have a total of nine aircraft to cater the domestic and international routes.”

Another Colombian airline, VivaColombia, plans to operate flights between Quito and Bogota from October. Currently, the airline, which operates under the low-cost model, covers 17 routes in Colombia and from August 1 flies to Panama.