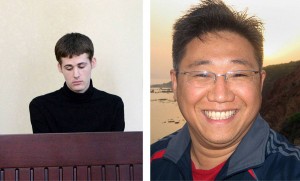 The Americans Matthew Todd Miller and Bae Kenneth were released by North Korea on Saturday November 8, according to the State Department of the United States. AFP

The State Department of the United States announced on Saturday the release of two of its citizens who were detained in North Korea on a secret mission led by his intelligence chief, James Clapper.

“The State Department welcomed the release of American citizens Kenneth Bae and Matthew Todd Miller in the Democratic People’s Republic of North Korea, where they have been detained for two years and seven months, respectively,” he said in a statement.

The release comes just two weeks after Pyongyang release another American Jeffrey Fowle, 56, who was jailed in April after allegedly leaving a bible in the bathroom of a nightclub. They were the only Americans who remained prisoners in the country.

Matthew Miller, 24, was sentenced to six years by the Supreme Court of North Korea after being arrested for allegedly breaking his visa and asylum.